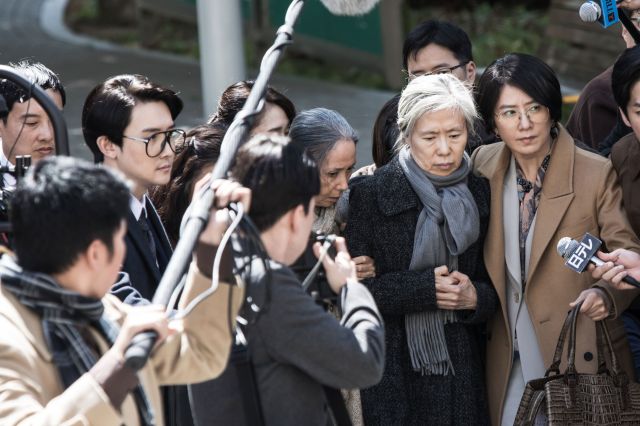 Joong-sook (played by Kim Hee-ae) is a bespectacled Korean woman who runs a travel agency in the early nineties. Joong-sook's success as a small businesswoman has greatly elevated her social standing. The beautiful opening shot of "Herstory" depicts Joong-sook and her equals sitting on elevated chairs opposite a mirror, making them seem like giants compared to the adoring aspirational women on the other side of the table. But Joong-sook is no mere capitalist. Her housekeeper Jeong-gil (played by Kim Hae-sook) was a comfort woman during the Japanese Occupation, and Joong-sook wants justice.

That phrasing is a bit of an anachronism. At the time "Herstory" takes place comfort woman wasn't actually a term yet. The South Korean government had long refused to acknowledge the existence of comfort women to avoid antagonizing Japan. Indeed, at several points in Joong-sook's quest, she is attacked for her goals on account of how any Japanese crimes against Korea were supposedly settled way back during Park Cheong-hee's tenure as dictator.

Consequently Joong-sook's attempts to put the Japanese government on trial have as much to do with raising awareness as anything else. In some of the movie's darkest moments we see that even normal Korean people take offense to the notion of comfort women, saying that the aggrieved victims in question are just looking for a payout. With these scenes taken into account, it's easy to understand why Joong-sook has so much trouble recruiting former comfort women to testify. Most of them don't want to deal with the present day abuse and past day bad memories.

The team Joong-sook does manage to put together comes off as...odd. As in, several of them are obviously mentally ill. At trial, of course, this is called dementia. But it's easy enough to read between the lines. This was the only way these women had of dealing with the trauma. And really, once we see the shockingly elaborate and frightening scars these women still have seared into their flesh, it's a wonder they're even that lucid.

That was my favorite aspect of "Herstory" was just how it portrays comfort women neither as empowered heroines nor as pathetic victims. They're just damaged women who had to be convinced that yes, what happened to them was awful and that no, the crimes against them need not linger in obscurity. Joong-sook is a woman of a new, democratic era of Korean history. If Joong-sook can't use what meager power she has to push for justice on behalf of the past generation, then what was the point of becoming rich in the first place?

"Herstory" is based on the six year Gwanbu trials in Japan that started in 1992 and ended in 1998- not counting the appeals process afterward, another several years that's merely described in the epilogue. Emotional elements notwithstanding, "Herstory" is a courtroom drama first and foremost, albeit one that's not too concerned with the vagaries of Japanese contract law. The story is, after all, told from the perspective of the comfort woman- as it should be.