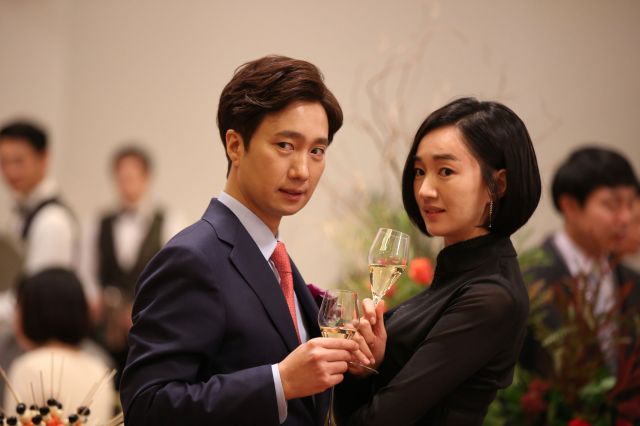 Tae-joon (played by Park Hae-il) is a well-liked college professor who does mild advocacy for labor-related causes. His wife Soo-yeon (played by Soo Ae) deals in art. They have a boring but functional marriage. That's not an intentional construction. "High Society - Movie" takes outrageous setpieces like one man setting himself on fire, another man dressing up like a Mexican wrestler to beat up on snitches, and an extended racist sex scene featuring excessive lube then somehow manages to make all that seem incredibly dull.

I suppose it helps that none of the men I just mentioned are Tae-joon. Really, Tae-joon and Soo-yeon both are passive protagonists to the point of it being a little obnoxious. They somehow manage to become major players in a massive corruption scandal involving a major bank by accident. Again, this is not an intentional construction of the movie. In context, the only explanation that makes sense is that Tae-joon and Soo-yeon are both just really really dumb.

The character of prosecutor Yeong-seon (played by Jang So-yeon) highlights this. She explicitly tells Soo-yeon what's going on in regards to the criminal conspiracy and Soo-yeon just...sort of stumbles around incompetently. Even given Yeong-seon's explanation of the scam I still couldn't really figure out how the conspiracy actually functioned. The entire thing seems to be built around blackmail schemes based on information that is acquired so easily any random idiot could bring the entire plot down at any minute.

The characters being so unlikable is another problem. I don't mean unlikable in the sense that we as viewers love to hate them, I mean that they're simply unpleasant to be around. Yong-suk (played by Yoon Je-moon) is the supposed ringleader of the conspiracy, but almost all of his screentime is dedicated to obviously stupid hobbies. It's a wonder that Yong-suk's secretary Miss Kim (played by Go Ae-ri) puts up with his ridiculous behavior. Goodness knows the woman has a pained expression on her face every single scene and obviously wants to turn him into the authorities.

I might have gotten the actress wrong, by the way. "High Society - Movie" has a lot of superfluous characters who appear for only two or three scenes and seem to be important, then they disappear without explanation. Jeong-hoon (played by Kang Ki-young), for example, is the first character to discover one of the movie's poorly hidden extramarital affairs on-screen. But Jeong-hoon never gets a follow-up where he actually confronts the participant in the affair he cares about so...what was the point?

Oh, who am I kidding. There's no need to be rhetorical about it. The point is sex. "High Society - Movie" is a thinly veiled excuse to throw gratuitous sex at its audience. There's even a scene in here where an attractive woman strips down to her underwear, I guess, to express dominance over the character she's intimidating? A pity the fantastically boring plot takes up almost the entire screentime, leading to a gross weird climax that once again, somehow manages to be boring because the whole exercise is just so self-indulgent.