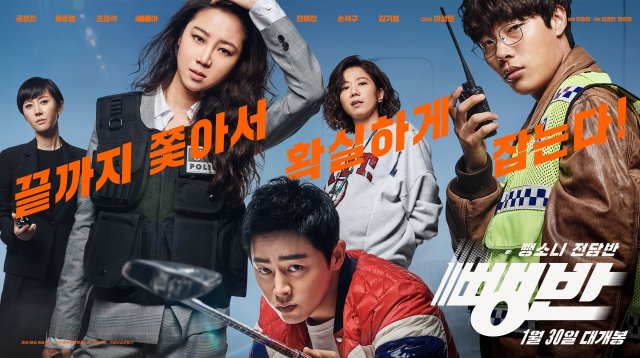 Police lieutenant Si-yeon (played by Gong Hyo-jin) has been annoying her superiors at work with her corruption investigations, so they transfer her to one of the goofier branches of the force- the one responsible for investigating hit-and-run accidents. The work's a lot harder than it sounds. How do you track down a driver in a fast vehicle who's running away? In the big introductory setpiece we see a huge squad of police cars having to physically box a truck in to prevent its escape.

Wait a minute, you might be wondering. If the "Hit-and-Run Squad" is a low prestige branch of the police, how did they have the pull to physically damage several police cars just to catch one errant hit-and-runner? Well, uh, there isn't any explanation really. This becomes a recurring problem as "Hit-and-Run Squad" goes on. Putting any thought into the plans put forth by the main characters whatsoever just makes it obvious that the plans don't make any sense and are dumb.

This is a real shame because the characterization is surprisingly strong. Ryu Jun-yeol is great as constable Min-jae, a stuttering weirdo who disarms crooks because their first reaction is to not take him seriously. Cho Jung-seok also has a great turn as Jae-cheol, a sinister psychotic corporate leader and hardcore racing afficiando with serious parental figure issues. The movie's best scene has Min-jae confront Jae-cheol at a party, the whole encounter giving out great awkward energy.

Everyone else though? The main contribution the rest of the "Hit-and-Run Squad" brings to the operation is that they sometimes drive vehicles which are used to clumsily slow down other vehicles by ramming into things. The familial barbecue scene shows them to be a tight-knit group yet nothing is really done with this. As the character with lead billing Si-yeon ends up being surprisingly subordinate to Min-jae, the only character who gets to do much of anything in the second half.

Outside of the "Hit-and-Run Squad" other characters are so poorly defined I didn't even realize who they were for most of the movie. A couple of them appear to be Jae-cheol's henchmen then I realized they were also fairly high-ranking police officers. This kind of seems like a problem, cops being buddy-buddy with the main villain, but "Hit-and-Run Squad" constantly vacillates between whether low level cops are loyal to the law or loyal to the police conspiracy, to the point it's impossible to guess whether any new cop we run across is a good one or a bad one.

Rather than address any of this "Hit-and-Run Squad" instead spends far too much of its runtime trapped in overwrought drama with obnoxiously clichéd speeches about how you can't go evil to fight evil, or something. Overall I was mostly just annoyed by the lack of consistency, or even a sense of humor. "Hit-and-Run Squad" goes out of its way to avoid being fun when it has the perfect cast for an ensemble comedy. No wonder "Extreme Job" easily overpowered it back in January.