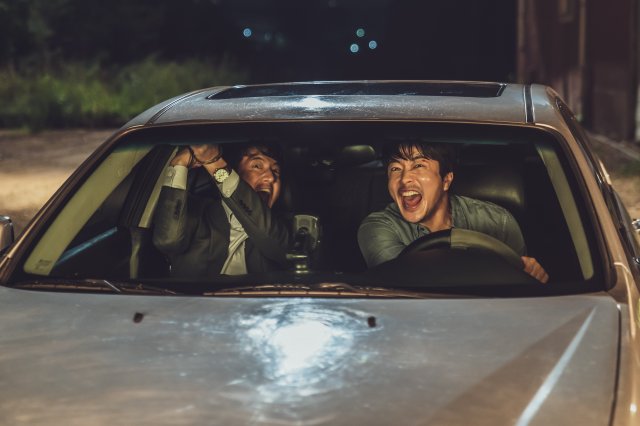 Whoa there, you might be thinking. Isn't that kind of grim? Well, yes, yes it is. Which is another place where the movie's nineties era origins are difficult to ignore. In a world where most movies at least pretend to have moral ambiguity when it comes to functionally brainwashed super soldiers, "Hitman: Agent Jun" just accepts its premise uncritically and even jokingly. After all, Agent Jun's dream is to be a professional webtoon artist. That's why he quit his boring day job of super spy action stuff.

"Hitman: Agent Jun" gets a lot more comedy than it rightly deserves just off the absurd contrast in this premise. Agent Jun's long suffering wife Mina (played by Hwang Woo-seul-hye) has to be the breadwinner off of her fairly meager high school art teacher salary. Their teenage daughter Ga-yeong (played by Lee Ji-won-I) raps about the domestic squabbles prompted by fighting over money. These scenes are sweet and at times even tender, making Agent Jun a surprisingly relatable character.

So when the secret action hero stuff crashes back into the story it's a bit of a rude shock. I was expecting more of a comedy of errors where Agent Jun must resort to increasingly implausible schemes to fend off enemies aware of his true identity without alerting his family as to what's going on. But instead Agent Jun gets stuck between two antagonistic forces right away and, eh, it's all right as a set-up goes. It just wasn't as interesting as what I was expecting.

The comedy only rarely goes as far as it can or should. Both the secret government program and the terrorists are for the most part portrayed as highly competent and terrifying where a more bumbling portrayal would be funnier. One highlight is a scene where Agent Jun is forced to abruptly turn his car around- technically complying with his wife's instructions, in spite of her immediate fury, and also enraging the terrorists who have no choice but to impotently wait for Agent Jun's return because their entire plan hinges on his physical presence.

"Hitman: Agent Jun" also suffers from having characters who are either underutilized or underdeveloped. Deok-hyoo (played by Jung Joon-ho) is supposed to be this fearsome headmaster character but outside of the opening sequence and the very excellent webtoon collages we never see him exert much gravitas. Cheol (played by Lee Yi-kyung) is supposedly one of Agent Jun's best friends from his spy days but the two rarely ever even talk, suggesting that maybe a whole subplot had been edited out of the movie.