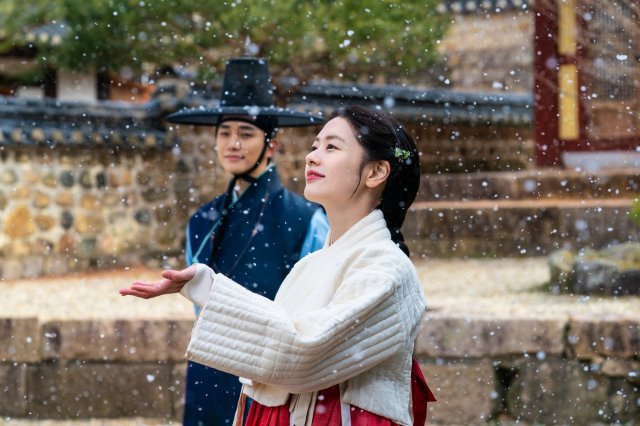 Saek (played by Lee Junho) was born into a gisaeng house. Now, a normal boy born into a gisaeng house would leave it and do something else upon passing into adulthood. But Saek? He actually really likes being there. Saek refuses to take obvious hints that he should leave, the result being silly slapstick sequences that eventually grow to encompass weird homeless guy Yook-gap (played by Choi Gwi-hwa) who acts as a generally unhelpful male influence as Saek tries to bring gender equality to the notion of courtesans.

The entire premise is transparently absurd. But then that's where most of the charm comes from. Saek is a good-looking guy who loves women, just not in a particularly sexual way. He just likes hanging out with them, and just being everybody's friend in general. This attitude coupled with Saek's unusual background provides amples opportunities for great situation comedy gags, especially when Saek's business scheme starts to get rolling.

However, "Homme Fatale" isn't really about Saek's business scheme at all. The movie's real story (and ultimately, the explanation for the movie's flash-forward framing device) is actually about Saek's budding romance with Hae-won (played by Jung So-min), a demure woman who is perceptive about her social limitations in the Joseon era. This too, is played for irony. Saek dreams big, but hopelessly, so his courtship with Hae-won has obvious tonal clash.

This culminates in a beautifully emotional ending that really perfectly encapsulates nostalgia at work, as we see how this one beautiful moment in Saek's life led to him trying to do something not so revolutionary, really, but true to himself in the best possible circumstances. The ending is so effective I nearly forgot that for the most part "Homme Fatale" doesn't really play like a romance at all. The climax in particular...kind of comes out of nowhere, focused as it is on a very realistic problem actual gisaengs had.

For all its obviously ridiculous trappings "Homme Fatale" works surprisingly well just as a historical piece about gisaeng life. We see how being raised by gisaengs has given Saek a strong appreciation for dramatic flair and proper make up. The sets are beautiful, and really perfectly set the ambience for how people to go the gisaeng house to experience a wonderful magical night. Saek's idea to improve business really is a natural extension of the idea it's just, you know, sexism.

Aside from the aforementioned climax "Homme Fatale" does a surprisingly good job straddling the line between wildly different tones while still, for the most part, feeling quite plausible. "Homme Fatale" is a genre romance in the sense that it's a love story, but it actually works a lot better as a literal romance. This is a movie about Saek putting the best possible face on a happy period of his life that ended in tragedy, and we can see how by not wallowing in misery, he was able to find peace and understanding. The tone is naturally bittersweet, but then all romances truly are in the end.