[HanCinema's Film Review] "How to Break up with My Cat" 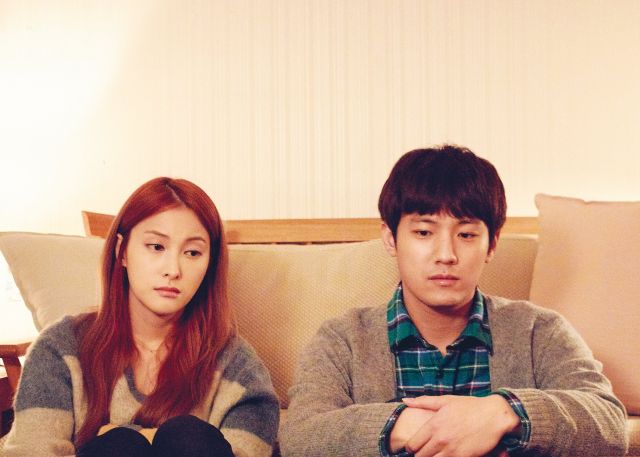 Na-bi (played by Seo Jun-young) is an apprentice sushi chef who since childhood has had the special ability to see into the souls of cats. While Na-bi does not himself currently own a cat, this ability becomes immediately relevant to daily life when a woman named Jeong (played by Park Gyu-ri) moves in next door, bringing a cat with her. And so begins the romance between these three- man, woman, and cat.

"How to Break up with My Cat" is that very rare sort of romantic film- where the focus is not on the passion, but the nuts and bolts of the daily relationship. This is appropriate considering the anchor of Na-bi and Jeong's relationship is a cat who is fairly laid back and easygoing, as cats often are. While Na-bi may have borderline psychic powers when it comes to understanding cats, he is less talented at understanding girls, and it should come as little surprise that Na-bi's main interest in Jeong is not her prettiness, but rather that she owns a cat.

Literally this creates an amusing opening sequence, where Na-bi has to endure dirty looks from a cat in order to move forward on some pretty obvious signals of romantic interest on Jeong's part. But metaphorically, the love of cats (or at least a specific cat) effectively bonds Na-bi and Jeong together as it is through their love of the cat that they can appreciate each other's sincerity. Much like the cat, Na-bi and Jeong take comfort merely in seeing each other every day.

Eventually, of course, the cat falls to the same fate which all cats (and people) eventually must. And that's what "How to Break up with My Cat" eventually deals with, as the title implies. How to deal with this inevitably sad moment? The answer to that question ends up being to just try and continue living life like normal, and not worry about it so much because the cat certainly doesn't.

I do feel a little crazy, writing about cats like they're mysterious sages whose Buddha-like teachings can guide us on to the path of true prosperity. In that sense "How to Break up with My Cat" pretty effectively nestles us into Na-bi's eccentric worldview, where these aphorisms actually come off as useful advice. Which when you think about it is all a relationship really is, be it with a cat or a human- mutually reenforcing one another with casual displays of unconditional affection.

Of course that much isn't just Na-bi's point of view. Any serious pet owner, I think, ends up empathizing with those beliefs sooner or later whether they realize it or not. There's something very universal and comforting about that kind of love, and the final scene where Jeong takes a good look at her cat, and sees that same enigmatic entity that Na-bi has been talking to the whole movie, well, there's serious emotional power in that. This emotional power makes "How to Break up with My Cat" a genuine joy to watch.

"How to Break up with My Cat" is directed by Cho Sung-kyu and features Seo Jun-young, Park Gyu-ri and Lee Young-ran.

"[HanCinema's Film Review] "How to Break up with My Cat""
by HanCinema is licensed under a Creative Commons Attribution-Share Alike 3.0 Unported License.