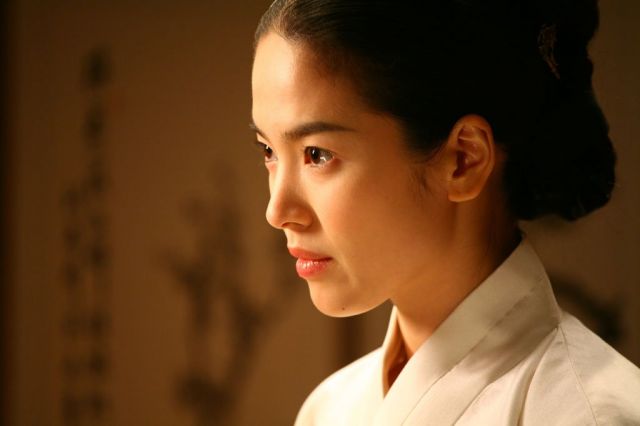 Jin Yi (played by Song Hye-kyo) eventually becomes one of Korea's greatest poets, though she is technically a fallen woman, having become a courtesan with the somewhat unusual background of an upper class education. But once upon a time, Jin Yi was just a little girl with curiousity about the world. This curiousity ends up mingled with horror, as Jin Yi discovers the darkness hidden behind the opulence of wealth, and even the secret of her own birth. From there, Jin Yi feels like she has only one choice- to find her own way.

It's very temping to paint Jin Yi as a feminist figure born long before her time- yet director Jang Yoon-hyeon avoids such modern flourishes. While Jin Yi rejects much of her contemporary culture, she does not do so out of an anachronistic desire to make the world a better place. Jin Yi's protest is a much more quiet one- absent any apparent vehicle for radical change, she retreats into mental contemplation, in the hopes that a search for wisdom might grant her better respose.

The philosophical material at play in "Hwang Jin Yi" is fairly strong- unfortunately it's not really material that translates very well to film, so in practice what we're left with is a rather long movie which studies a person who philophosizes rather than any of her actual philosophies. To someone (like me) who does not know very much about the historical figure save for a few legends, "Hwang Jin Yi" does not do a very good job of explaining who exactly this person is and why she's important.

That much is a shame because the few legend setpieces I did recognize were quite powerful. Take the scene where Jin Yi puts a shroud over a coffin. In legend this story seems to be a harbinger of destiny. In context, the shroud is symbolic of Jin Yi's grief, not simply over death, but of realizing that she's not who she thinks she is, and an entire lifetime of childhood innocence was merely play in a doll's house. There, Jin Yi could only be happy as long as she couldn't see the strings.

Yet even if I were an expert on the historical person of Jin Yi other parts of the story especially struggle for relevance. Take Jin Yi's childhood friend No-mi (played by Yoo Ji-tae). After suffering in silence for all too long, only stopping to say the wrong things, he ends up in a straight-up power struggle against the government. No-mi's story is actually much more dynamic than Jin Yi's, and yet is constantly set just out of view because No-mi was a victim of history. Jin Yi, by sheer luck of artistic relevance, managed to transcend destiny.

But again, "Hwang Jin Yi" doesn't really explain why Jin Yi was important, so what we're left with is a sad, gloomy film with sparse lighting and spare music, all meant to indicate a vibrant world that loses its sense of life when the threads of reality are throbbed too closely. There's a great deal of interesting analytical material in "Hwang Jin Yi", but that material is just dense enough that I don't have any choice except to reluctantly decline to recommend the title on general merit.