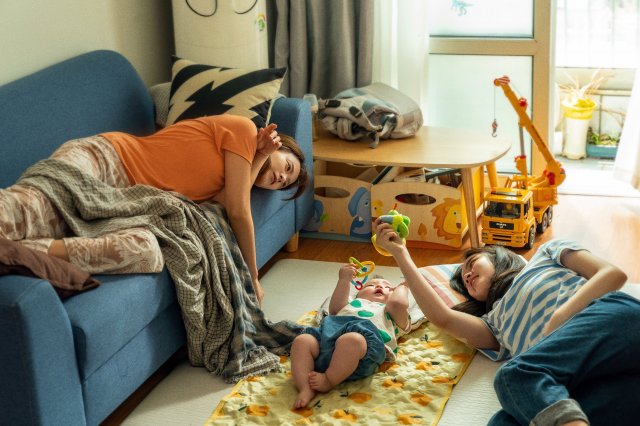 If nothing else "I" wins an award for having quite possibly the worst title of any movie ever released. Although to be fair I may not be aware of other movies with similarly bad titles because like "I" they're nearly impossible to search for. Luckily, with Kim Hyang-gi in the leading role you can probably find it or this review by just running a search for movies she's appeared in. Anyway, here Kim Hyang-gi plays Ah-yeong, an orphan and college student who does childcare for Yeong-chae, played by Ryu Hyun-kyung, who works at a gentleman's club.

I'm glad I saw the English subtitled version of "I" since this also gives me the chance to correct a grievous error in the English translation. Yeong-chae is not a stripper. Employees at gentlemen's clubs generally do not take their clothes off. They try to get the gentlemen drunk, and might allow the gentlemen to fondle them within reason, but gentlemen's clubs are not as crass as strip bars even if both establishments have a dubious legal reputation.

Now, you might be annoyed at how I'm spending so much of this review contextualizing the movie rather than describing what actually happens. "I" itself suffers from similar meta-narrative issues. The core concept is really strong. But writer/director Kim Hyuntak lets himself get way far afield with extraneous plot points that require so much explanation it really wrecks the pacing, particularly as most of these plot points do not receive satisfying resolution. The worst are probably the bits with the lawyer character, which end up being completely unnecessary.

This forces these characters to be inherently reactive. Which might be part of the point, that poor people are so consumed day to day living drama they can't actually plan for the future and figure out how to make a long term life for themselves. The trouble is, by the time we get to the final act, we're getting the conclusion to an emotional arc for Ah-yeong that kind of comes out of nowhere, since it's based entirely around her personal emotional response to a single social issue that received no significant prominence compared to the other ones.

"I" is a movie with its heart in the right place but a very questionable structure and framework that badly needed more editing and drafts. Even the title is multi-layered with its overly broad emphases. The Korean title is just the word for child, which is pronounced the exact same way as the word "I" in English. The movie is trying to be clever at the expense of parsability, making it a poor primer for exactly the kind of people writer/director Kim Hyun-tak is trying to educate.