[HanCinema's Film Review] "I Can Speak" 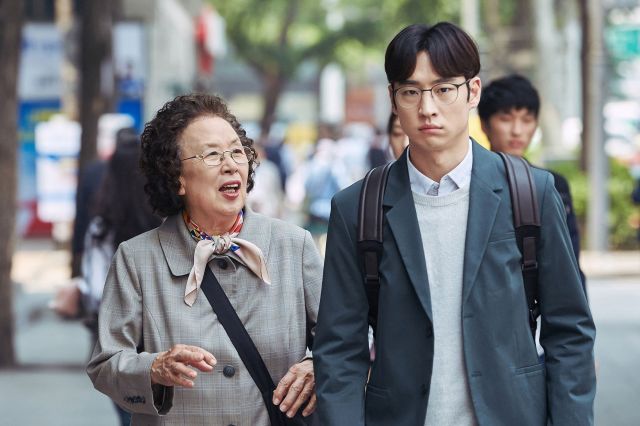 The year is 2007. Min-jae (played by Lee Je-hoon) is a very smart young man who, for reasons we only find out later on, takes a job as a public servant speaking directly to constituents when Min-jae is very much not a people person. And at this particular office, everyone has to talk to Ok-boon (played by Na Moon-hee)- an older woman and a busybody who has made it her mission to file official complaints when mere browbeating is not enough to foster community improvement. Together they...learn English?

Well, Min-jae already knows English. So really, the story here is about Ok-boon's desire to learn the language for the very simple reason of wanting to talk to a long lost relative. For all her bluster, Ok-boon is a surprisingly lonely older woman, and it's to the credit of "I Can Speak" that we never really pity her. As we get more backstory, it becomes clear that Ok-boon has led a genuinely miserable life. Yet she fights on. Why?

Mostly it's just to keep people from seeing her in a pathetic light. The sheer power of Ok-boon's resolve is quite impressive. Upon getting hit with a triple whammy, rather than curl up and die, like might be expected, Ok-boon simply moves full throttle to a completely different goal- one where her English studies could come in handy. Although really, the main issue is Ok-boon's determination that she owes no one an apology. To the contrary, they owe one to her.

It's thanks to Na Moon-hee's talent as an actress that Ok-boon does not come off as overbearing. Indeed, a lot of "I Can Speak" just feels like an instructional for bureaucrats like Min-jae. Oh, so you didn't want to be a government bureaucrat, and were forced into it by circumstance? Well guess what. Lots of people don't get to have their dreams come true. So swallow your pride and work on making the world a better place rather than a worse one.

I mean, the message does come off as a little condescending in the meta perspective, considering that we can't really argue with Ok-boon's position. Which is incidentally one of the nicer touches. When Ok-boon goes nuclear in the face of disaster, we immediately see why that is. Ok-boon likes being treated as an obnoxious busybody. Ok-boon doesn't think her personal life experiences make her any kind of inherent expert in anything aside from those specific life experiences.

This renders Ok-boon all too mortal. So we're left thinking, does Ok-boon really have a chance in the climax speaking in front of strangers when the more emotionally charged moments of daily life are her weakest? Ok-boon is able to needle Min-jae because he's trying his best to be a faceless bureaucrat. That Ok-boon succeeds in getting him to think past that, well, that's her main intrinsic success here. If you want to make a difference to a lot of people, you have to start with just the one.

"[HanCinema's Film Review] "I Can Speak""
by HanCinema is licensed under a Creative Commons Attribution-Share Alike 3.0 Unported License.