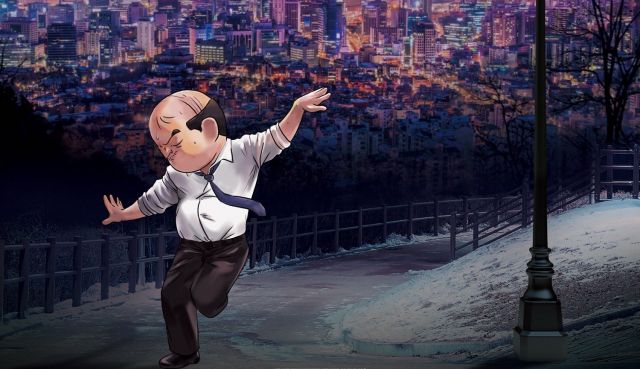 Joon-goo (voiced by Lee Seung-haeng) teaches acting at the university level as an adjunct. In practical terms an adjunct is just a normal professor except with less pay and no job security. Though popular with his students, their sincere praise of Joon-goo's acting abilities tends to stoke Joon-goo's dreams. Sure, the guy's in his forties and supporting a family. But don't television dramas need short, homely, middle-aged balding characters too?

"I'll Just Live in Bando" details the curious sequence of events that leads Joon-goo to agonize about whether he should take the security of a full-time professor job or dive into the romanticism of finally starting a serious acting career. Notably this ends up turning into a false choice. The very weird circumstances under which Joon-goo catches a break at school prove more significant than he suspects. Additionally, we eventually find out that the acting job Joon-goo was offered was actually just an open audition.

Ah, but see, there I go interpreting Joon-goo's situation logically. To Joon-goo, a man who has long been desperate for his luck to turn around, who unknowingly suffers a massive hardship as a result of his idiot son, unbridled optimism is the only way forward. The final extended chase sequence of "I'll Just Live in Bando" is a marvel of frantic animation. Joon-goo has made his choice, and no matter how destructive that decision ends up being, Joon-goo refuses to just let go.

The supporting cast is also quite good. Gi-peum (voiced by Oh Ga-bin) is a surprisingly manipulative young woman whose role in Joon-goo's promotion takes on such a negative dimension that she somehow manages to become the villain of the second half. Then there's Joon-goo's shrewish wife who provokes much of Joon-goo's agony by being so aggressively mean. In between these two it's easy to lose sight of how Gi-ho (voiced by Lee Yong-woo-I) is the actual bad guy here. He just gets away with it by being a charming eccentric with a deliberately ambiguous speaking style.

"I'll Just Live in Bando" is fundamentally a dark comedy juxtaposing the nobility of Joon-goo with the chaotic destructive world in which he is trying to survive. In between that and the acting pretensions, Joon-goo is an extremely relatable protagonist, who through sheer force of will refuses to believe that the universe is out to get him. I rather liked the ending, which depicts Joon-goo in less-than-ideal circumstances and yet he seems much happier than during his false optimism phase.

The implication is obvious. You can get what you want and still not be happy. So naturally the opposite is also true. As for me? What I wanted was vibrant animation in the service of an offbeat plot with exaggerated overemphasized drama- something we can really only ever see in the animated format. My expectations were more than met and exceeded. "I'll Just Live in Bando" is a legitimately great movie, and a welcome addition to the ever small club of serious feature length South Korean animated films.