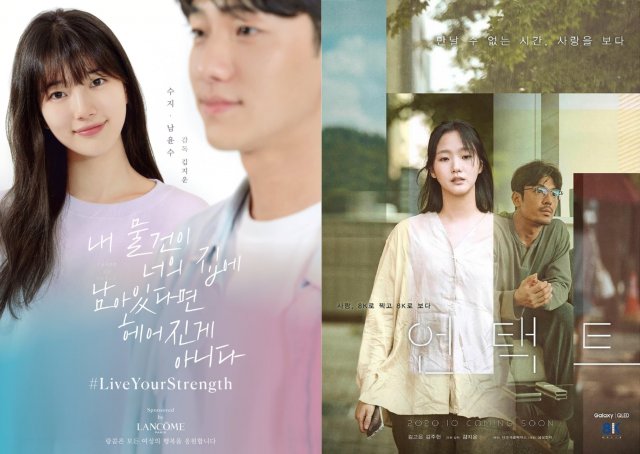 Director Kim Jee-woon has not exactly been a name in high demand lately since the underwhelming performance of "Illang: The Wolf Brigade" in 2018. Nevertheless, his production company, Dark Circle Pictures, has been busy making movies on a smaller scale this year. These commercially minded flicks feature Bae Suzy and Kim Go-eun in leading roles. Far from the bombastic flicks he's better known for, "If My Things Are At Your Place We're Not Over" and "Untact" are personal, down to earth stories dealing with solitude and relationships.

In "If My Things Are At Your Place We're Not Over" Bae Suzy plays a woman whose boyfriend breaks up with her over text message. There's almost no dialog or even character interaction, yet Bae Suzy gives a powerful performance as a woman who plunges into quiet sadness and then moves on to quiet rage. She's compelling in spite of the movie's obviously being funded by a cosmetics brand, if only because her circumstances are easy to relate to and well communicated over the short twelve minute runtime.

"Untact" featuring Kim Go-eun is a much longer more ambitious project, although its themes aren't quite as relatable. Though Kim Go-eun has most of the screentime she isn't quite the lead, that role instead going to Kim Joo-hun as her ex-boyfriend. The story is largely framed by his returning to South Korea after some time abroad. Here too, the breakup was managed by text message. Although as we eventually see, the separation wasn't entirely out of nowhere.

My main issue with "Untact" is that it has very stalkerish undertones. The reason why Kim Go-eun has the most screentime but isn'tthe perspective character is because nearly the entire runtime consists of Kim Joo-hun's character watching her vlogs. Maybe stalkerish isn't the right word to use here. After all, Kim Go-eun's character presumably makes the vlogs explicitly so people can watch them. Nevertheless the whole experience feels quite odd.

"Untact" is also a much more obviously commercial product than "If My Things Are At Your Place We're Not Over" in that it was produced mainly to promote new brands of smart phones. All of the footage in "Untact" was filmed with such phones. Given the huge emphasis on vlogs, the obvious intent of this was to show that you too could make professional looking vlogs provided you have this particular brand of smart phone.

It's subtler to be sure, although on balance I think I preferred how "If My Things Are At Your Place We're Not Over" just unsubtly nudged some brand name cosmetics into frame every so often. Both movies have very similar tones, although Bae Suzy has by far the best performance of the bunch because she's the most naturalistic. Kim Joo-hun is a bit of a goofball, while Kim Go-eun is deliberately putting on a show. Neither of them are bad, the subject matter's just a tad overly romantic considering how "Untact" opens up with a borderline dystopian vision of how different South Korea is now due to COVID-19 safety measures.