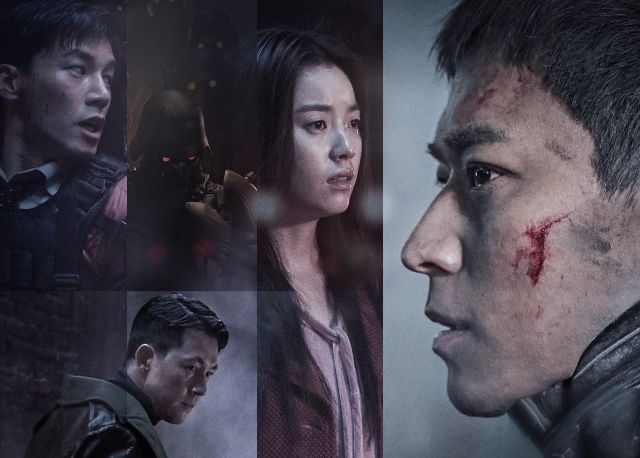 In the far-off year of 2029, reunificiation between South Korea and North Korea is imminent. There are riots in the street. So the South Korean government makes use of "Illang : The Wolf Brigade", a paramilitary task force that attacks anti-reunification terrorists. Jin-tae (played by Jung Woo-sung) leads the brigade. Cheol-jin (played by Choi Minho) gathers intelligence for them. Our main character Joong-kyeong (played by Gang Dong-won) agonizes over his past role in the death of a large number of innocent schoolgirls, taking solace upon meeting the mysterious Yoon-hee (played by Han Hyo-joo) at Seoul Tower.

It's difficult to keep track of everything that's going on in this movie, mostly because information is withheld for the sake of later plot twists. The main thing we know for sure is that the fairy tale of Little Red Riding Hood is going to be metaphorically worked into the conclusion. Director Kim Jee-woon deliberately includes a lovingly creepy, highly stylized, minimally animated sequence where Joong-kyeong and Yoon-hee discuss the story's themes.

But more than the theming, I was caught off guard by how horribly tone-deaf "Illang : The Wolf Brigade" is politically. Take the opening scene in Gwanghwamun- a popular site of real life protests, except this particular anti-reunification protest features Wolf Brigade Stormtroopers, complete with terrifying all-black uniforms, beady red eyes and a huge face covering masks. The sudden appearance of violent terrorists is not a particularly convincing justification for their presence, considering that fascists have always used the excuse of violent terrorists to commit all manner of police state evil.

To an extent the production team is obviously aware of how unconvincing this looks. After the Wolf Brigade hunts down a bunch of normal humans in a sewer, the story shifts gears to a complicated conspiracy theory, since normal humans inevitably come off as the sympathetic side when they're fighting against nightmarish killing machines. Well, that and the romance between Joong-kyeong and Yoon-hee I guess. They don't really stand out that much compared to the infinitely more intense action scenes.

And that's the real shame here. "Illang : The Wolf Brigade" contains some of the legitimately greatest action sequences I have seen in quite some time. Every last confrontation is a brutal logistical battle. Firearms, robots, those suits, defensive ground, and scouting takes major preeminence in every conflict, whether Joong-kyeong's goal is to escape or exterminate all of his opponents. Yet for all this high tech mastery, a simple low tech move like smashing something with a giant metal pipe can be all it takes to force a complete turnabout in the latest battle.

Ironically enough the very brutal realism of the movie's violence, coupled with the political pretensions, completely kills any hope "Illang : The Wolf Brigade" has when it comes to functioning as escapism. While the movie is technically masterful, the moral implications are profoundly disturbing, and only made worse by the tacked-on happy ending. That much might just be an adaptational issue. The original Japanese version, Jin-roh: The Wolf Brigade, felt no need to pretend like any of its characters were particularly noble.