[HanCinema's Film Review] In Defense of "The Cat" 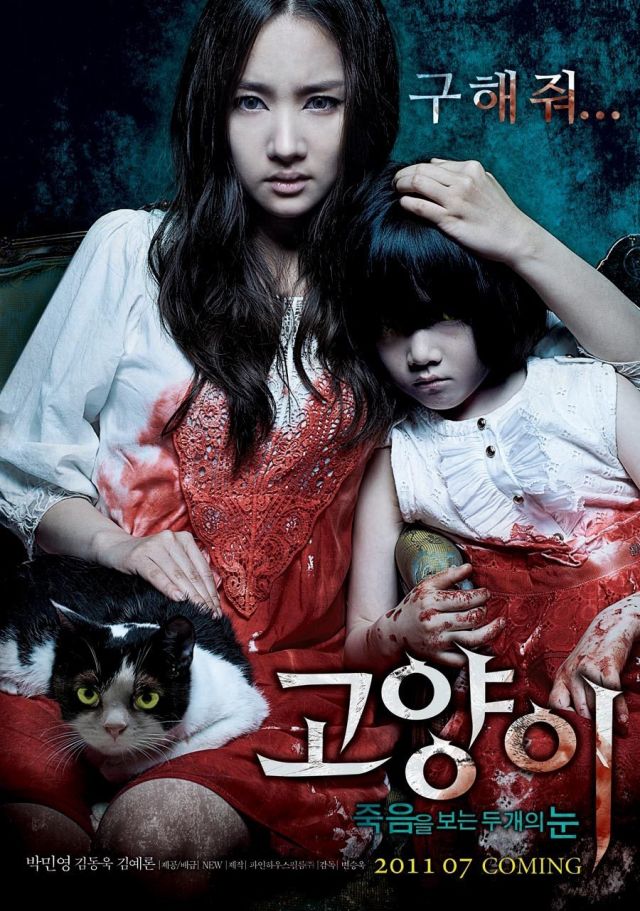 Byun Seung-wook's "The Cat" has been misjudged and misunderstood. Before writing this I came across a number of reviews citing numerous issues they had with the film. These criticisms largely stemmed from examining the film as strictly a 'horror' film and how the conventions of the genre weren't well executed within it. In addition, "The Cat" was seen to contain poor tonal and thematic motifs, impotently embossing its narrative with soft-core techniques and themes that resulted in nothing more than an average viewing experience. This displeased me because my initial reaction to the film was very positive. After some thought and reflection on the film, I began to formulate some of reasons I found this film to be not only entertaining but thought provoking as well.

Now, before I dive into some of the reasons I found this film to be well above average, lets look at the basic story here. Park Min-young makes her film debut as So-hee, a good-natured cat-lover who is tormented by a traumatic childhood experience. She suffers from chronic claustrophobia as she lives in constant fear that, if left in an enclosed space, some imminent danger will engulf her. So-hee works with an eccentric gentleman as a pet groomer. When her latest client is mysteriously murdered, she takes on the responsibility of caring for her cat "Silky". However the cat seems to come with some unwanted baggage in the form of a disturbing little girl (Hee-jin played by Kim Ye-ron) who haunts her from there on out.

The mystery, at least initially, is discovering the link between the cat, the young girl, our protagonist, and the deaths surrounding them. But once that link is chained the film undergoes a subtitle shift as the mystery gives way to film's primary focus, that of visual expressing our protagonist's psychological journey of healing. "The Cat" may make use of some horror conventions but if that mind-set is continued throughout, the film will no doubt appear to fall short in many areas. The "mystery" of events will then result in the climax of the film being misinterpreted and seem almost obvious and unbecoming of true horror.

South Korean films have always appeared to me to have issue with genre, and "The Cat" is no exception. I feel that a lot of the negative feedback the film has received has been unjustly dished out as a result. The viewer may be primed with a generic expectation that some may not be willing to surrender when the film modifies its course. A horror film it is not, at least not when considered in the traditional sense. If I had to force a category onto "The Cat", I think it would better be appreciated as a psychological fear film. I don't mean to debate semantics here but the criticisms the film has received seem so off the mark that I think such a distinction is necessary.

Our protagonist suffers with both internal (her claustrophobia) and external (the child ghost) conflict and the degree to which they are connected is vital in understanding the film in its entirety. As the film progresses, the distance between So-hee psychological condition and the real-world events that follow her continues to narrow. There is a huge gap between her being attack by a ghostly figure under her bed to her embracing the deceased girl within a confined space at the end. This is where the film works its magic, through the thematic pairing of So-hee and the little girl, the filmmakers have work into the mechanics of the piece a link between them that is mutual inclusive as their conflicts become simultaneously resolved.

So-hee suffered a trauma when she was a little girl and it is now a little girl who haunts her. Her resolve to discover the truth behind Hee-jin and her hauntings is one that serves a dual purpose. The first is the most noticeable, to resolve the story behind the ghost that can't move on. The second is that all though it is Hee-jin who can't move on, it is So-hee who is struggling to move forward. Their fates are entwined and the filmmakers have laid the groundwork for that synergy, weaving it into both the narrative and the overall tone of the film.

Consider that the victims of the Hee-jin are never actually "haunted" by their ghostly killer, but our heroine is. So-hee's hauntings are her fears incarnate, something that needs to be confronted in order to transcend them. Unlike the victims, she did not threaten the cats and as such her life was not at risk. The viewer knows this but we also need to probe as to why this is. Here we can see a psychological agent emerge, as So-hee's fear is visual represented through the hauntings (the unresolved conflict that lingers). Hee-jin is what she fears (representing both internal and external conflicts), the danger in the dark, the threat that dwells in enclosed spaces. Parallels like this are there to be seen and the connection between them is key to understanding the film's progression.

Almost every review I read acknowledged that film was competently made and visually quite attractive. But in the same breath lay criticism against it as a horror film. "The Cat" contains some very elegant composition and the cinematography is not only eye-catching, it's appropriate. Films that contain overt psychological elements have this theme manifest itself not only through content but through form as well. The mechanics of the film are definitely on the same page in "The Cat" as the message and visuals exists as one. Many a scene is introduced with a shallow depth of field that refocuses as character enter. As if there is a constant effort to illude to a presence existing in the space prior to action. A stillness, or pretext, that primes the scene with a strong sense of unease. It is almost as if we, the viewer, are briefly possessing that which So-hee fears -- the danger in the dark, the object of her despair lurking in the corner. Similarly, the frequent use of extreme close-ups act as reminders to the details that exists in the world and the meaning they can hold, constantly screaming "look closer".

Clues to Hee-jin's fate can be seen in her eyes as the screen is dominated early on by their cat-like coldness. Walls and door handles are put in focus as objects that define boundaries, in which So-hee's fear resides. The film's visual aesthetic is a claustrophobic one and it serves the narrative well within the film's thematic considerations. All the murders take place within confined spaces, reinforcing the fear we know So-hee has to overcome. Even the film's palate was inline with this idea as muted tones of yellow, blue, and grey washed over each scene and helped to paint an uncomfortable psychodynamic. Yellow, in particular, was dominant, eliciting feelings of fear, danger, unease, friendship, hope, and covetousness. All applicable to "The Cat" and the struggles and trials our characters go through. This is where the film draws you in, not though its shock and horror techniques, but through subtitle compositions and subliminal emotive techniques.

What about the cat? Yes this film is called "The Cat" but lets not get too hooked on that notion and begin referencing other, and arguably, better cat horror films. Cats in the film are the messenger, the common link shared between protagonist and the fear she must confront. They are the objects, not the subjects. Hee-jin and So-hee share unresolved issues but it is the cat(s) that brings them together to conquer them. They are not evil or sinister by themselves; they are in possession of this same-shared sense of torment felt by their human companions. If there is one trait that holds true to about cat mythology in the film it's that of being mysterious and strangely powerful.

In the early stages of the film, when the mystery is at its highest, the cats are seen as

creatures to fear. But by the end of the film their stories come to light and fear is replaced by understanding and sorrow. I feel like the cats themselves were almost a red herring in the film that distracted, and for some too much, from the films true intentions. They served their purpose perfectly and, even though they could be simplified to being just a story hinge, their impact was justified. Questions beyond their intended function are pointless and shortsighted, narrowing the reading of the film to one that is limited to overreaching preconceptions and ill-serving contextualization.

"The Cat" deserves some credit, and from what I have read thus far it has not gotten that. The film's message and ideas are woven into its mechanics with such cinematic sensibility and consideration that it's hard not walk away with some appreciation. Dismissing the film as a failed horror is not only unfair, its completely unjustified. In writing this I have hope to share some of the film's less obvious layers that I believe make it a great film worthy of any recommendation.

"[HanCinema's Film Review] In Defense of "The Cat""
by HanCinema is licensed under a Creative Commons Attribution-Share Alike 3.0 Unported License.