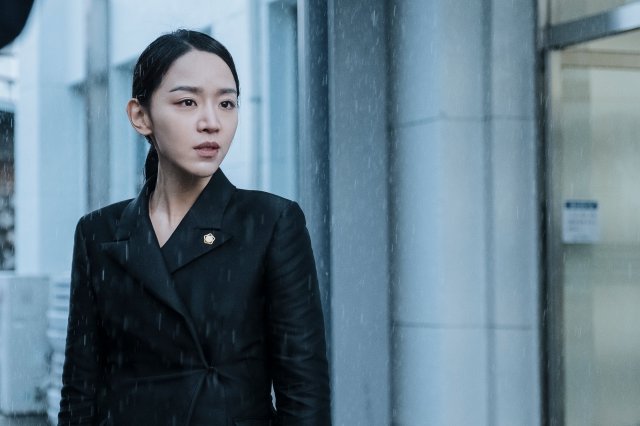 At the start of "Innocence" we're treated to a horrific scene wherein various members of a funeral banquet start vomiting rice wine, having clearly been poisoned. The apparently senile Hwa-ja (played by Bae Jong-ok) is the main obvious culprit, as the woman who prepared the food for the friends of her departed husband. So it is that Hwa-ja's daughter Jeong-in (played by Shin Hye-sun) returns to the outskirts of Daejeon, determined to prove that her mother is innocent.

Why exactly Jeong-in believes her mother is innocent is...less than clear. While the movie's story sounds like that of an accomplished professional adult coming home to learn the true reasons behind her dysfunctional childhood, the family elements in "Innocence" are surprisingly underemphasized. At the same time, the family scenes are unfortunately by far the movie's most compelling. The flashback wherein it's explained how, exactly, Jeong-in's younger brother Jeong-soo (played by Hong Kyung) came to be mentally retarded is particularly dark and heavily laced with moral ambiguity.

In general, though, "Innocence" is a legal thriller where the fundamental aspects of the case just aren't that interesting. We get lots of endless relitigating of an old shady real estate deal. The deeper Jeong-in gets into the case, the less obvious it is how any of the new information actually relates to the mass poisoning. The villainous Mayor Choo (played by Heo Joon-ho) even calls Jeong-in out on this during the climax. Mayor Choo's corruption is ultimately weirdly besides the point. A scene wherein his goons physically menace Jeong-in and her brother serves little purpose save to establish that Mayor Choo is evil.

The one-dimensional portrayals get to be irritating if only because they start to feel so arbitrary. Corporal Choi (played by Han Yi-jin) and Constable Yang (played by Tae Hang-ho) both know Jeong-in from their school days. Both speak in outrageous dialect. But Corporal Choi is coded as a bad guy and Constable Yang as a good guy because...well I'm honestly not sure really. The movie just takes it for granted that Jeong-in should trust one and not the other.

Jeong-in herself suffers a lot as a character just because writer/director Park Sang-hyun-III simply assumes that we should be on her side. I felt like she was a bit condescending, personally, and her competence being established by her interviewing an expert witness in English didn't do a whole lot to impress me. I never disliked Jeong-in but it's telling how the only times I could really identify with the woman were when she expressed vulnerability and guilt over having abandoned her home so long ago, implicitly blaming herself for the nasty events that followed.

"Innocence" is a perfectly watchable legal thriller. It also has that nice ripped from the headlines quality going for it, as murder by dousing farming chemicals in rice wine has, indeed, happened in real life Korea. But the movie makes the mistake of consistently misidentifying its most compelling worldbuilding, instead becoming a fairly dull tale of political corruption, and consequently, a disappointment.