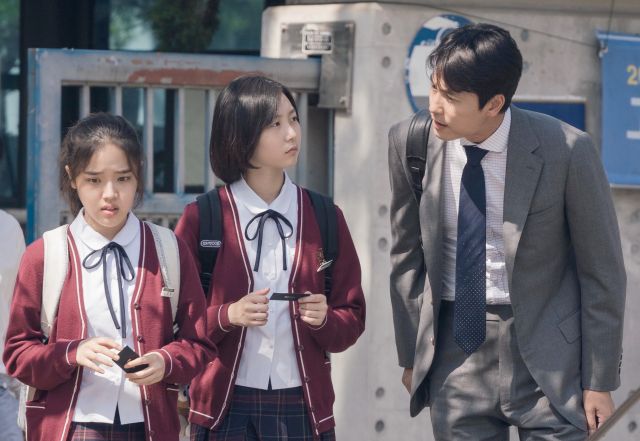 In the opening scene of "Innocent Witness" we see the alleged crime that autistic teenager Ji-woo (played by Kim Hyang-gi) saw. There are no frills- just a few seconds of struggle from far away. We can't really see what's happening, so how much Ji-woo saw is also left ambiguous. From there the movie switches gears to defense attorney Soon-ho (played by Jung Woo-sung), who tries to get access to Ji-woo because whatever she saw is the only eyewitness testimony.

"Innocent Witness" is a legal drama in the fully realistic mode. Soon-ho's job is not especially flashy. The movie's approach to evidence is extremely mundane, as Soon-ho is just presenting material that supports his theory. Tellingly, Soon-ho barely ever talks to his client Mi-ran (played by Yeom Hye-ran) because what she has to say just isn't that relevant to Soon-ho building an effective legal defense. In Mi-ran's version of the story, she was just a poor bewildered wife who had no idea what was going on.

Soon-ho's relationship with Ji-woo has to be viewed in the context of the legal case. When Soon-ho is trying to figure out how to talk with her, and thus communicate with an autistic person, his thinking is purely functional in terms of how this helps his client. Note that because "Innocent Witness" is presented from Soon-ho's perspective, and he is generally shown to be a nice guy, this functionality is frequently obscured. So while we see Soon-ho as coming to understand autism, in reality he is still always treating her as an other.

That's a remarkably ambiguous approach which is all too accurate when describing how autistic people have to interact with the world. Scenes of Ji-woo getting bullied at school, and how this affects the people in her life, are brutal because they're understated. We can see why Ji-woo is justifiably paranoid of change. We can also see how she has to put so much more effort than anyone else into trying to live normally, only to face a sudden attack from an unlikely source that anyone would have trouble weathering.

This ties in neatly with Soon-ho's own character arc and personal relationships as well. His participation in Mi-ran's case, while presented as noble, is also presented as having some unclear and possibly unethical interest to his law firm. Actually I felt that whole part of the denouement was the weakest part of the film, because a complicated conspiracy just pops up out of nowhere. It was hard to follow, and rather out of place with the generally educational interpersonal drama we had seen up until that point.

Because that is how Soon-ho is changed by interacting with Ji-woo. At one point Soon-ho is unable to explain why it's a good thing that he's likely to make partner at his firm. That scene presents an excellent philosophical question that is frequently called back to- why did Soon-ho want to become a lawyer at all? What does a man in his mid-forties want or expect out of life at that point? It's a lot to think about.