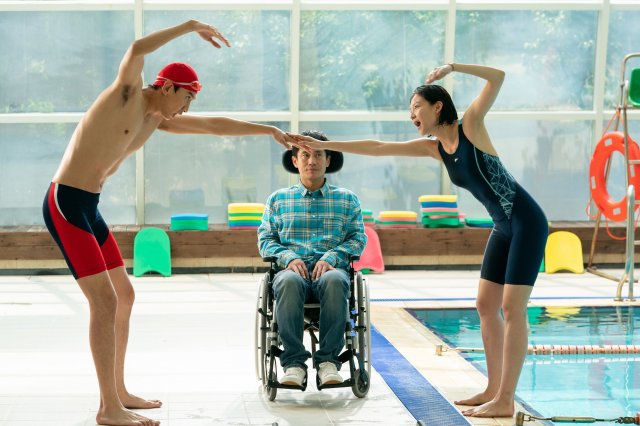 Se-ha (played by Shin Ha-kyun) is a surprisingly cynical, shifty guy considering that he's bound to a wheelchair. The opening backstory of "Inseparable Bros" quickly gets into why- Se-ha was dumped at a charity home for the mentally infirm. The chronically alcoholic Father Park (played by Kwon Hae-hyo) accepted Se-ha in exchange for a modest bribe, although oddly enough he's a pretty nice guy. All the same it's Dong-goo (played by Lee Kwang-soo) with whom Se-ha shares a special, brotherly bond.

"Inseparable Bros" is the story of that brotherly bond, and the movie burns through a lot of storylines to get through to that point. In addition to the backstory with the teenage future bros, there's also a con artistry subplot as Se-ha attempts to take over Father Park's patronage, an athletic triumph story as Dong-goo starts to compete in local swimming events, an estrangement storyline as Dong-goo's mom Jeong-soon (played by Gil Hae-yeon) attempts to get back in his life, a huge courtroom storyline about a legal challenge to the relationship between Se-ha and Dong-goo, and then the aftermath of that storyline.

"Inseparable Bros" is a very busy movie- albeit a fantastically well-paced one. "Inseparable Bros" perfectly captures the way life can change for people way faster than seems rational. Se-ha grimaces and bears the inconvenience, as befits his generally cranky character. But Dong-goo is so mentally infirm it's hard to get a grasp on how much of the situation he actually understands. Even Se-ha isn't sure about that a lot of time.

And yet these two unrelated men clearly see one another as brothers and permanent friends. That's what the movie is about through and through-friendship. Abstractly "Inseparable Bros" no doubt sounds incredibly corny- but the beauty of the movie's design is that in between Se-ha general scheming attitude, the sincere frustration characters feel toward Dong-goo's stupidity, and the constant juking about of storylines, this goofiness is mostly unnoticeable.

Mi-hyeon (played by Esom) plays a critical role less by being plot-critical and more by providing a rational confused response eventually snowballing into warm acceptance of the brothers' relationship. Most of the characters in "Inseparable Bros" work along the same trajectory. By challenging the relationship between Se-ha and Dong-goo, they actually affirm it because Se-ha and Dong-goo aren't predictable martyr figures. Their actions are surprisingly difficult to predict.

This element of camaraderie is where "Inseparable Bros" comes up with most of its laughs- although just as much credit belongs to the extremely strong cast, who have great functioning chemistry. Even a character who is rather obnoxiously introduced by obsessively staring at his phone ends up having a surprisingly strong redemptive arc simply by being more proactive in trying to help out the bro he gets stuck with. No one in this movie is a bad person, even if most of them make questionable decisions at one point or another. This really helps with understanding Se-ha and Dong-goo from an outsider perspective, and how we can know that they're brother without necessarily being able to understand that.