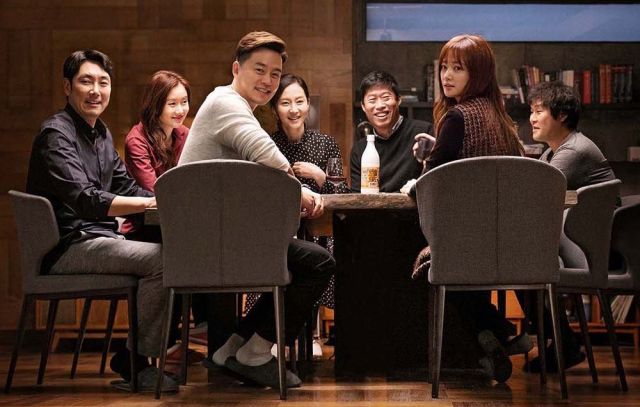 Seok-ho (played by Cho Jin-woong) and his wife Ye-jin (played by Kim Ji-soo) have dinner parties with their five friends every so often. This time around Ye-jin finally has the gumption to suggest a game that will, for one night only, destroy all their privacy. "Intimate Strangers" is as much about secrets between partners as it is secrets between friends. Observe how Se-kyeong (played by Song Ha-yoon) is always jokingly ribbing her older more experienced husband Joon-mo (played by Lee Seo-jin) about his past womanizing.

"Intimate Strangers" somewhat betrays its own premise in that we know full well there has to be something more complex and sinister going on under the surface, or else we'd be left with a movie completely lacking in conflict. The main underlying question is what exact form the explosions will take. That all seven party-goers are harboring one major secret of some kind is obvious. What matters is the severity of the secret and more critically, the timing.

"Intimate Strangers" is structured and even filmed mostly like a stage play. All the action takes place in the apartment, save for brief sections at the beginning and end that work to frame the story properly. Information is withheld from us in the prologue scenes. The epilogue allows us access to furtive background secrets of a less dramatic trip home from the dinner party, complete with a bonus scene of what the most emotionally healthy couple of the group does when they get home.

The main fun to be had during the middle portion is trying to guess which moments are fake-outs, which ones are just set-ups for later twists, and which are actually big horrible secrets. There's a lot of ambiguous middle ground between the three because all of them, even the film's most outrageous bits of drama, are always played for comedy. Sometimes the mockery is gentle, other times farcical, and other times it feels like the universe is playing a horrific joke that only seems funny to us because we know the situation isn't as bad as it looks.

An extremely strong cast is necessary to make this concept work. Though billed as a comedy, in context, it's necessary that the performers are always at an impasse when it comes to what emotion they have to do next. The element of surprise is critical. It forces the viewer to emphathize with other blindsided characters, even if our superior knowledge gleaned from a few key scenes allows for a sense of detachment.

Ah who am I kidding. It's a movie, of course everything is detached. But "Intimate Strangers" goes a step farther than that by giving cameo appearances to famous voices in the South Korean entertainment industry, which really just goes to show how the movie is an all-star production. "Intimate Strangers" is, to take a break from all these complicated and fancy words, quite funny. That's also the main critical narrative thrust. Even without all the fancy subterfuge necessary to maintain a secret life, there is still substance in friendship.