[HanCinema's Film Review] "Into the Night" 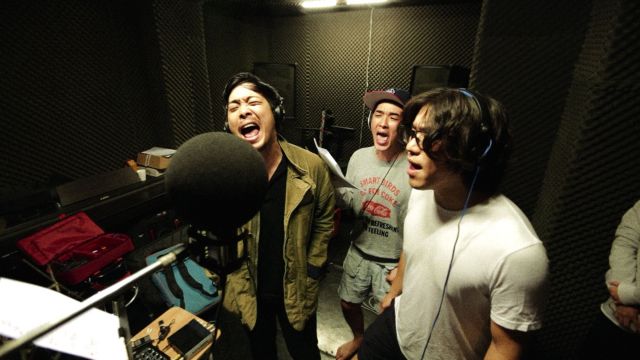 The Monotones are an independent rock band operating out of Seoul. Well, they were anyway. While much of the drama of "Into the Night" centers around whether the band will survive the filming of the documentary (which took place in 2015), the fact that they won top rock prize at the Korean Music Awards in 2016 and successfully produced albums renders the survival question a moot point. Then, right before "Into the Night" received an official domestic release in March, the band collapsed.

All of this information, while technically irrelevant to the documentary itself, is nonetheless an accurate summation of the film's content. Which is to say, it's about a bunch of guys in a rock band of varying experience levels who constantly get drunk and bicker with each other, not always at the same time or in that same order. We get an intimate look at the band members' beliefs when it comes to what makes proper rock music- such as the source of their name.

The explanation doesn't actually make much sense. As is discussed, the word monotone unavoidably implies simplicity. But everyone just charges ahead and decides to go with the idea anyway. That's the main repeated premise "Into the Night" focuses on. No matter what the setback, old hand Cha Seung-woo is determined to do whatever is necessary to make the band work, even if he has to resort to lecturing fellow musicians who are, as far as he is concerned, amateurs.

I use that word literally rather than pejoratively. Cha Seung-woo has had a long history as a professional musician and knows how hard it is to make a career in that field work, talent or not. Of course, the same can be said for Park Hyeon-joon. On that end the main obvious fault lines are just personality clash as the high ends of being a rock band, the booze and the music, are contrasted with the low ends- mostly just arguments about scheduling and timetables, which take up a lot more time than you'd think.

How are The Monotones musically? Well, on this front "Into the Night" is a bit counter-intuitive. For most of the documentary they sound very mediocre, but that's because almost all of the footage we get is just of them practicing. Eventually director Karl Jae-min manages to show off some serious performance sets. The contrast is nice. The Monotones are a mess when it comes to organization, and their music philosophy is nowhere near as interesting as they think- but they are indeed excellent musicians.

But even if the "Into the Night" album is pretty solid that doesn't say much for "Into the Night" as a film. It's hard to imagine anyone except a serious fan of the band being all that enthralled by all this random footage of band members hanging out and talking to each other. The documentary just doesn't have enough basic exposition to give the story context for anyone not already familiar with the ins and outs of the independent South Korean rock scene.

"Into the Night" is directed by Karl Jae-min.