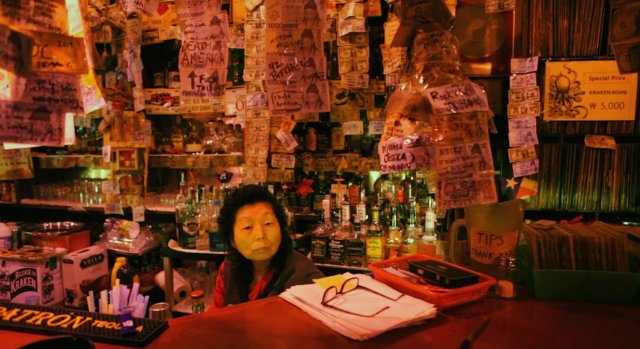 The Itaewon district of Seoul has long been known as a cool and happening. The recent drama "Itaewon Class" deliberately plays off this mystique, centering around a young man trying to start his own restaurant there. But long before Itaewon was cool was it was just...this place, where peddlers came from far and wide to try and make their fortune. Itaewon used to be next to an American military base. American soldiers, especially in the olden days, tend to have money and not much to do with it.

While filmed before the Yongsan garrison withdrawal, the imminence of the event looms large over "Itaewon" as a whole. Director Kangyu Ga-ram doesn't pay as much attention to the issue as you might expect, only discussing the issue in written text, backgrounded by the ramshackle landscape of Itaewon itself. Quiet moments of the camera at work are themselves bookends for various casual interviews about what it's like to be an older woman of Itaewon.

Thus begins a weird contrast of a forgotten era, a confluence well explained by Samsook's observation that Americans like history and Koreans don't. Itaewon as a concept is derived from dual fetishisms. Foreigners enjoy the distinctive fusion culture because it makes Koreans approachable. But when Samsook explains why she started the best country bar in Korea the response is just, seemed like a way she could make money.

"Itaewon" does not fetishize its own subjects. Samsook is the sole conventional success and all have the same sort of weariness, the same level of survival instinct. All childless, with varying levels of happiness in their marriages, these women express a casual degree of resignation when it comes to Itaewon's marriage culture. This is most sharply emphasized in a segment going over how bargirls try to get married and leave fast. Younghwa, one such former bargirl, does not dwell on the topic.

Younghwa lacks regrets. Naki has some involving family she can't really do much about. Looking back there's a definite kind of peace in seeing that all their decisions were functional and based on limited options. There's little resentment even as we see, in one case, a a little girl forced into a dysfunctional situation based on immigration status. Such persons on the margins have always called Itaewon home, since it's a place where people tend not to ask questions.

The ruins of that culture are what director Kangyu Ga-ram focuses the camera on. Consequently "Itaewon" feels more like, say, an exploration of ancient Rome than it does anything with obvious contemporary relevance. No matter what may come in the future Itaewon as we know it will no longer exist. Regardless of whether the neighborhood is gentrified, or if the government tries to main its quirkiness somehow, the necessity is gone. Samsook, Naki, and Younghwa are all creatures of habit, who seem satisfied to subsist in these habits as long as they can. There's something very quintessentially human in that which, paradoxically enough, just makes Itaewon seem all that more special.