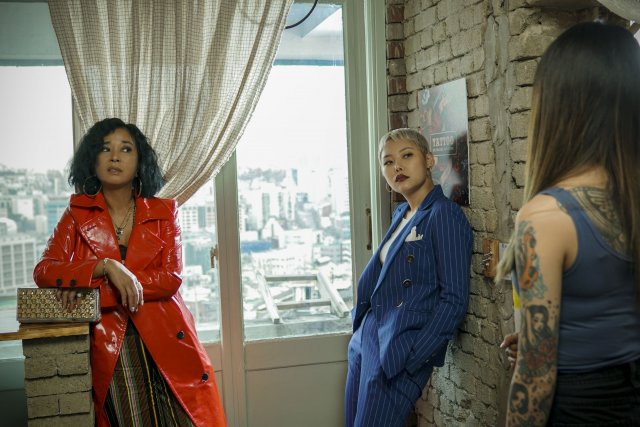 Blue (played by Cheetah) is a jazz singer working in Itaewon living with her high school age sister Yoo-ri (played by Choi Ji-su). Their mother, played by Jo Min-soo, isn't much of a parent. It's intimated that she has financial resources, somehow, but is in general so needlessly hostile and destructive that both Blue and Yoo-ri try to avoid dealing with her. But Blue, at least, has little choice in the matter when mom's first visit to their home coincides with Yoo-ri disappearing without explanation.

First and foremost "Jazzy Misfits" is a love letter to the Itaewon district of Seoul. It's a surprisingly nuanced one at that. Far from fetishizing Itaewon as this cool place where all the gay people and foreigners hang out, "Jazzy Misfits" instead posits Itaewon as a place where ne'erdo-wells can lie low. This isn't necessarily because they're bad people, it's just that making a living is hard. Even Blue is seen to be going through obvious trouble, in spite of her strong local reputation as a jazz singer.

Yet Blue appreciates the anonymity of this environment, preferring her stage name to her birth name. This is because Blue's mom is hopelessly dysfunctional. While "Jazzy Misfits" is effectively styled as an offbeat buddy comedy mystery, the movie is blunt when it comes to showing that Blue's mother is a terrible parent. Late on Blue scores a brutal, if fair hit to the effect of stating that her mom was always a dysfunctional psycho and never a person who's really warranted much in the way of pity.

I liked how the movie made it easy for us to understand Blue's Mom without ever really liking or trusting her that much. As we come to see, this is pretty much the same position Blue herself is in, and it's an embarrassing one. Blue is always the cool girl, the one who's in charge. Blue got that way by realizing that she had to take care of herself rather than expecting her parents to step up. While it's a depressing situation Blue makes the most of it.

This is not to suggest that "Jazzy Misfits" is by any means a depressing movie. Director Nam Yeon-woo infuses the project with a screwball vibe, as Blue and her mom are forced to rummage Itaewon in search of Yoo-ri's location, constantly hitting upon weird aspects of the neighborhood all the while. Delinquent high school students, awkward encounters at the phone store, and random background characters turning out to be parkour specialists all prove compelling local flavor.

It's the characterization that really sticks with me. Take one scene where Blue's mom abruptly and in very bi-polar fashion transitions from deranged belligerent to warm, sunny mentor figure upon being informed of one character's backstory. The central mystery is really besides the point against these character moments, such that "Jazzy Misfits" manages to convincingly pull off the exact same plot twist three times in a row. That's the kind of hustle that can only really be pulled off with serious charm and chemistry.