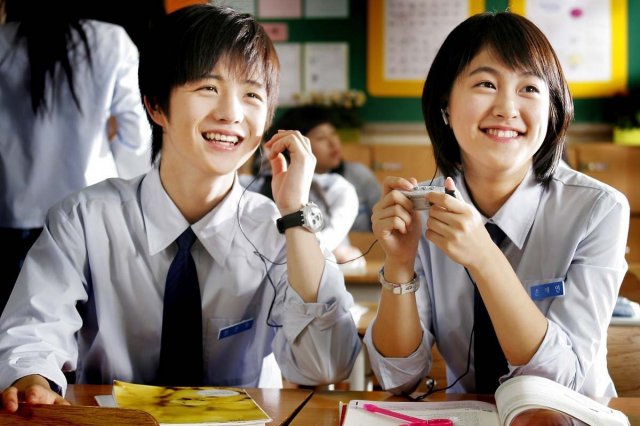 Jenny (played by Park Min-ji) is a middle school student who we immediately see taking a pregnancy test that turns out positive. Her first reaction, naturally, is to confront her boyfriend Juno (played by Kim Hye-sung) and ask him a bunch of strange hypothetical questions before finally telling him the shocking news. Jenny and Juno then proceed to very cutely and clumsily stumble through whatever limited resources are available to them in order to make their relationship work.

The key word there is relationship, more than pregnancy. There's surprisingly little foresight on the part of the lead characters about how having a baby will change their lives. This is imminently appropriate, given that they are idiot teenagers who are surprisingly self-sufficient. They just take their problems one day at a time, slowly transitioning from adorable puppy love to a bond powerful enough to inspire them to defy their parents. Such determination would have been unthinkable at the beginning of the movie.

The tone remains fairly consistent thoughout. "Jenny, Juno" is, for better or worse, trapped in a cycle of its own idiot teen logic. It's cute for awhile, but after a certain point "Jenny, Juno" can't really escape its own weak production values. This is the kind of movie teenagers would make about themselves, complete with goofy plot points involving Starcraft tournaments. The sound design is similarly dated, consisting almost entirely of music that sounds like it came from an early twenty-first century computer program.

In all fairness "Jenny, Juno" was made back in 2004, so that's probably all writer/director Kim Ho-joon had available to work with for this obviously low-budget movie. And really, the dated design of "Jenny, Juno" is a big part of the movie's charm. A typical scene is like a time capsule into what normal everyday life was like back then. Although I did find myself wondering how many people really lived in giant Western-style houses at that time.

Such crudeness is less charming in terms of the story design. The movie never really resolves the implied conflict of what exactly Jenny and Juno are going to do with the baby. The climax simply involves them impeding the plan their parents came up with. In another weird twist, the entire mansion escape sequence ends up having no impact on the actual story at all. By design, apparently Jenny, Juno, and their friends were not expecting to pull off a long term solution there, instead settling for a purely symbolic one.

That's the main sympathetic way to watch "Jenny, Juno" is to just read the whole story as a metaphor for young love and growing up without getting bogged down in the obvious impracticalities of the plot. I liked the movie, but in a kind of condescending way because it was so clearly lacking in polish. Still, I must admit that the purity of the movie's generally silly message comes off much nicer than pretension on the same subject matter would. "Jenny, Juno" manages to hit just the right sweet spot between romanticism and realism.