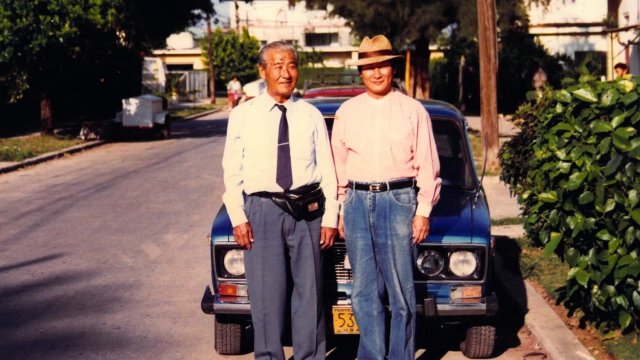 Director Joseph Juhn is a Korean-American New York lawyer who, on a lark, decided to visit Cuba shortly after President Obama announced a normalization of relations with the Communist country. By sheer dumb luck, the taxi driver he summoned at the airport happened to be an ethnic Korean woman. And so begins Joseph Juhn's inquisitive journey into just how it was that Korean people managed to end up in Cuba of all places.

"Jeronimo" has three subjects. We've got Joseph Juhn's story of becoming fascinated by the story of Korean-Cubans. Then we've got the historical background explaining how the Koreans ended up in Cuba and why they never tried to go home. Then there's the title character, "Jeronimo", a distinctive man of a past generation who was a seasoned, respected, politically active adult in Cuban life when the Cuban Revolution broke out, and he threw his lot in with the ultimately successful rebels.

"Jeronimo" himself is the strongest selling point of this documentary. He was a commanding family leader with ethnic loyalty to the home of his parents yet strong political consciousness to the notion of worldwide communist revolution. Well, at least that's what seems most likely, and therein lies the main problem with this documentary. Though very detailed in the pre-revolution years of Jeronimo's life, "Jeronimo" has surpiringly little to say about the decorated officer in the Cuban intelligence service and Communist Party.

For a sense of perspective, when the documentary hits the halfway point, where the Cuban Revolution has finally happened, Joseph Juhn just kind of trails off, as if he's reluctant to discuss motivations of a man whose main apparent function in the Cuban government was to serve as a liason with North Korea. We're explicitly told that Jeronimo must have faced regrets later in his life but we're given suspiciously little detail about this considering that Jeronimo's many surviving family members are more than happy talking about anything else regarding their beloved relative.

The vagueness of this documentary gets to me the more I think about it. One sequence has Joseph Juhn randomly meet with a restaurant hype man who has a Korean grandfather. The cigar smoking ninety-something Korean is quite a character, grumpily relating how insulted he was that after decades of Japanese dominion that prevented him from going back home, Koreans were fighting each other. Why they were fighting is oddly undiscussed.

Instead of getting into this more potentially interesting context, Joseph Juhn instead spends most of the latter part of the movie wandering around at random, getting into weak platitudes about how some of Jeronimo's descendants really love Korea, even though the main frame of reference for the younger ones is modern pop culture like BTS. A more serious documentary would take moments like this soberly, realizing that inevitably the Korean diaspora results in descendants with at best an abstract understanding of what their ancestral homeland is like. Unfortunately, "Jeronimo" is unapologetically sentimental- the music in particular becoming increasingly obnoxious as I impatiently waited for the documentary to end.