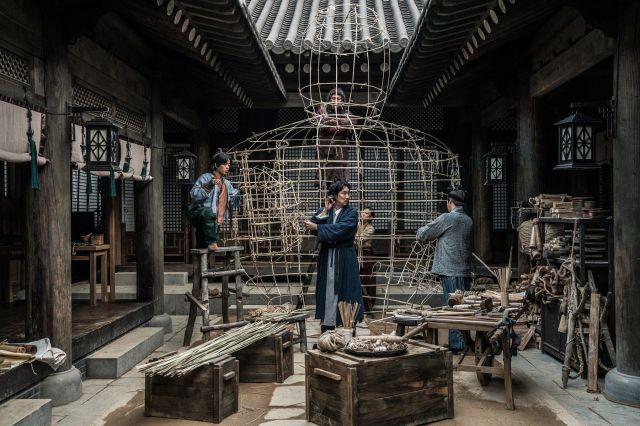 What would happen if an SFX team was active in 1464 Korea? Kim Joo-ho latest action comedy seems to give the answer to this rather playful question, in one of the most entertaining films of the year.

In an era were jesters are persecuted for mentioning that King Sejo took the throne by a coup, Deok-ho and his team of jesters try to make ends meet by performing around the country, without offending the authorities. This, however, is not a regular group. Deok-ho is an exceptional actor and storyteller, Pal-poong an acrobat with monkey-like speed and agility, Hong-chil a master of props, Geun-deok a former shaman and foley artist, and Jin-sang a painter of utmost precision. Their abilities allow them to create settings that look like they come straight from a movie, and it is that talent that draws Han Myeong-hoi, the king's right hand to them, in an effort to change the public opinion who considered his "boss" a crooked and sinister monarch. The members of the group have their objections, but the huge rewards in both money and status change their mind. As their efforts are met with success, however, they realize that they are in for something much more complicated and dangerous than they thought.

With the main premise of the movie being that of an "SFX" team acting in Joseon, it becomes obvious that Kim Joo-ho's aim was not realism, although a number of historically accurate elements are included in the film, as much as the machinations that were common in the Palace setting. However, the focus here is on entertainment, and "Jesters" offers it aplenty, through a pastiche of popular genres.

In that regard, the movie begins as a fantasy comedy of shorts, with the group using ropes, paint, and acrobatics to create tricks that look like miracles, with their efforts usually being accompanied by a significant level of agony regarding their success. As the story progresses and their past is revealed through flashbacks, drama becomes the main theme of the movie, while during the end, there is a significant turn to action, before the narrative concludes in comedy again. In that setting, the concept of being egoistical or caring for the common good and what is right and wrong becomes a central one, although the story provides a solution for the good guys that is not exactly of their own will. 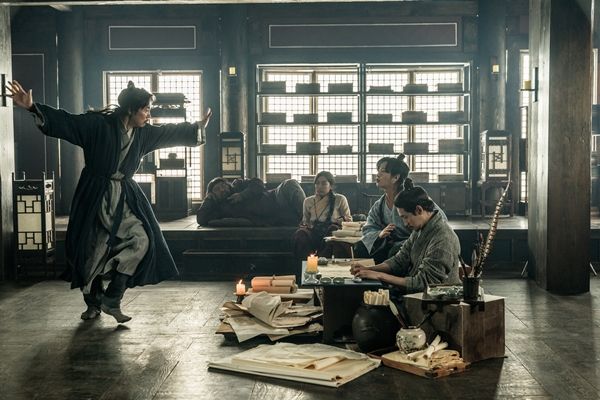 Humor is the element that permeates all parts of the narrative. From the naivety and extreme lack of courage the protagonists occasionally show, to the mocking of the tactics of the court, the way gossip works and the beliefs of the common people of the era all provide moments of intense humor, either in subtle or in more direct fashion. The attitude of the guard stationed outside the court during the finale is an excellent sample of the former, and one of the funniest scenes in the movie, with the same applying to the scene with the tree, for the latter approach.

The chemistry of the protagonists is excellent, with Cho Jin-woong heading the cast with an impressive performance, while Kim Seul-gi as Geun-deok is the second pole of attraction for the group, with the finale being the highlight of her performance. Son Hyun-joo is excellent as the villain, with his many transformations being amongst the highlights of the film, with the same applying to Park Hee-soon as King Sejo, although in a smaller part. 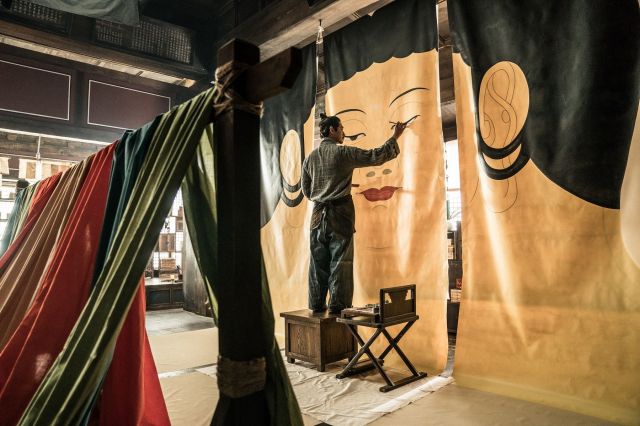 Joo Sung-rim's cinematography is impressive, highlighting all settings with artistry, and making the most of the great work done in the set design, costume, and SFX departments. Kim Sang-beom's editing induces the film with a very fitting pace that ranges from fast to frantic, although somewhere here is where the movie's most significant fault lies, since a number of scenes seem to be too long and others unnecessary at all, in a title that could easily last for 20 minutes less. This however, is a minor fault and does not harm the overall great sense the film leaves significantly.

In a year when Korean mainstream cinema seems to experience one of its best periods with titles like "Beasts Clawing at Straws" and "The Man Standing Next", "Jesters: The Game Changers" comes to cement the fact and gain a worthy position among the aforementioned productions