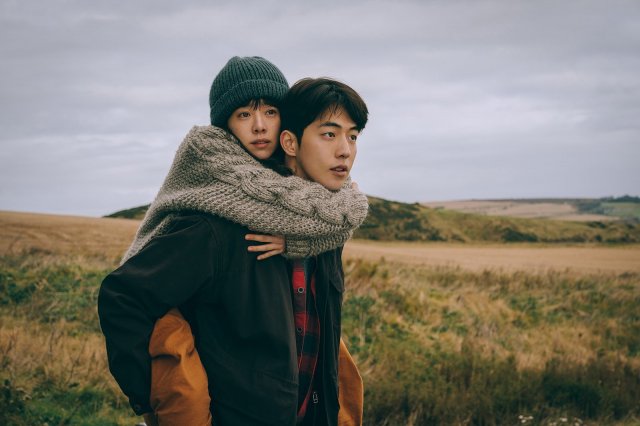 In one scene on a bus, we see college student Yeong-seok (played by Nam Joo-hyuk) sitting in the bleak night in front of an ad that promises learning English will grant him freedom. It's a bitterly ironic moment, but just one of many in "Josee" that uses the trappings of seeming romantic melodrama to ask what it really means to be free. Yet writer/director Kim Jong-kwan takes his time getting to this very moody point, ultimately starting the action off with Yeong-seok accidentally crashing into the wheelchair of the disabled Josee (Han Ji-min).

While Josee does not want Yeong-seok's help, she does ultimately accept it. Han Ji-min's performance here is truly sublime, as despite Josee's uncaring and rude form of speech, she ultimately just comes off as disinterested. Josee spends her days reading while her grandmother Da-bok (played by Heo Jin) makes a meager living by ragpicking. Despite their lives being nothing to envy, Josee really doesn't seem to want very much out of life, and Yeong-seok is drawn to this enigmatic quality.

Framed next to Josee, Yeong-seok's desires take on their own petty and meaningless dimensions. There are hints of his own relationships, be they with other students, professors, or possible employers, as just not being satisfying. Compare the sensual romance with which Josee describes a liquor bottle to how a character in Yeong-seok's more well-to-do life talks about the seeming spirituality of coffee. Josee maintains a thoughtfulness that's almost serene despite, or possibly because, of her tribulations in life.

The framing makes for a very peculiar romance, as Josee loses more of her distinctive appeal as Yeong-seok gets closer to her, encouraging Josee to have desires. Josee doesn't undergo character growth so much as she does character change. The tiger and fish metaphors which aptly describe Josee's outlook at the beginning of the movie mean less and less as time goes on. The relative lateness with which these metaphors are introduced heightens the sense of paradox as Josee's actions only really make sense several scenes after they're seen on screen.

Unfortunately, this paradox also applies to the climax, resulting in a post-timeskip portion of the film that doesn't really explain as much as it just shows. Though we're led to believe that Yeong-seok and Josee have both achieved freedom in some sense, I couldn't help but notice the irony of their both being depicted in a car, moving themselves about for the sake of obligations. Even the topic of wedding invitations feels oddly perfunctory, with Yeong-seok quietly wondering if he's lost something important.

Despite the haunting nature of the visuals I wouldn't say that "Josee" has a particularly dreamlike quality. This is more of a make-believe movie, with adults as the characters trying to imagine just what it is that adults are supposed to be doing. They fail, and are left unresolved. Existential dread lurks behind every corner of "Josee" yet never quite consumes the narrative. The movie's a melodrama without sadness- a fascinating experiment, although I'm not sure how much staying power it really has.