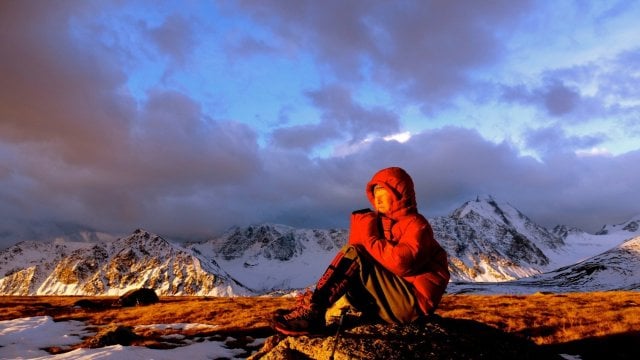 The mother of director Jung Hyungmin is an old woman in her eighties and a devout Buddhist. She's had a difficult life, being widowed in her late thirties and having to take care of her children on her own. She's a simple woman, without much in the way of desires. So it was that, as her final wish, Jung Hyungmin's mother asked for her son to take her on a pilgramage. Over "Journey to Kailash" they travel the long, empty roads from Mongolia to Tibet, living intermittently in the infinite wonder of the wild.

There's little conversation in "Journey to Kailash" although early scenes in Mongolian yurts prove instructive. One Mongolian speaks bluntly about how the steppe life is something few Mongolians understand anymore, as they've crowded into cities. Another grumpily discusses how much better life was under the communists. There were no rich people or poor people then, and everyone just lived well. One comment that really stuck with me was how, upon hearing a description of modern Korean social alienation, a Mongolian speaker observes that Mongolia has similar problems.

Jung Hyungmin has a keen appreciation how the steppe, while a spiritual experience for his mother, is not exactly a social experience. As we see throughout the documentary, most of what they do is simply wander around the wilderness. These moments are broken up by social visits or a small herd of wild animals. But even these chance encounters come across as broadly insignificant compared to the sheer huge majesty of nature.

It's also a journey with explicit danger. At one point Jung Hyungmin and his mother are caught in some bad weather, and both appreciate that the situation could get so bad as to be life threatening. Yet this scene isn't played dramatically, but rather as a matter of fact. Jung Hyungmin's mother, after all, fully understands that she will probably die soon. That's the entire point of the trip. Having lived in society for so long, it is only on the road to Kailash that she can finally remember what it's like just to be again.

Every frame of "Journey to Kailash" captures the visual nature of this idea perfectly. The sheer scope of the landscape in any given scene is hugely vivid, and overwhelming in the most counterintuitive ways. In one shot we see Jung Hyungmin's mother decrepitly stumbling along an elevated hill, only for mother and son both to suddenly realize that as they have been wandering, the sun has come into place in a magnificent position.

With so many movies and documentaries always trying to get at some larger point, there's something fascinatingly unique about how "Journey to Kailash" strives to be a movie about nothing, and feels grander than any possible deliberate statement. From the steppe to mountains to forests to roads to the desert, this documentary depicts a magical world well worth exploring. Better late than never- although really, this is the kind of beauty that likely seems that much more remarkable after eighty hard years of living.