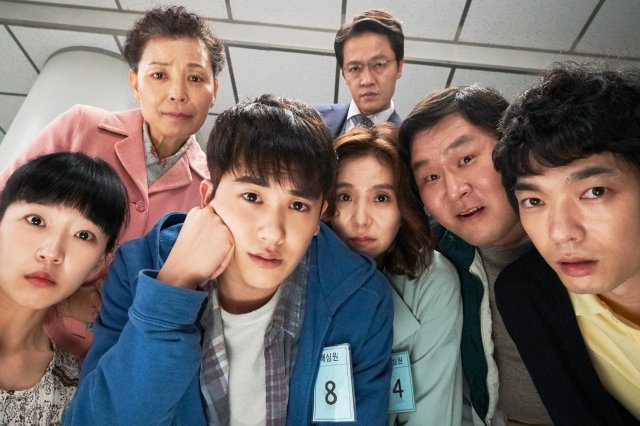 In 2008 South Korea held its first jury trial. It was a big psychological jump for the country's legal culture. After all, when you think about it, the entire idea of a criminal being judged by their peers is pretty strange. How would a bunch of random idiots know what does or does not constitute a crime? Our lead character Nam-woo (played by Park Hyung-sik) is one such idiot. Joon-gyeom (played by Moon So-ri) is by contrast the presiding judge of the nation's first jury trial, with thinly veiled scorn for the whole concept.

The main unavoidable weakness of "Juror 8" is that it has entirely too much slapstick. Much of the first half especially plays the entire situation too hard for laughs rather than the dramatic urgency it deserves. The trial in "Juror 8" does concern an alleged murder, after all. The soundtrack is particularly inappropriate, affecting an unnaturally wistful tone even in deadly moments of physical danger. Much of the situation presented in "Juror 8" is funny, but of the low-key understated variety. Dry absurdity is not improved by the addition of a theatrically styled laughtrack.

But the core concept is quite strong. No one has any idea what they're doing. Joon-gyeom has a stiff authoritarian disgust throughout the proceedings that's not even slightly photogenic. More critical, though, are the jurors themselves, most of whom receive frustratingly little exposition. Once deliberations starts though, we see them fumbling about for the right thing to do. Desperate for some form of precedent, even American TV shows are invoked as inspiration.

The class elements, though, are where "Juror 8" is at its most powerful. Joon-gyeom and other legal professionals are condescending and dismissive toward the accused (played by Seo Hyun-woo), a man of limited mental faculties. For the educated class, he's a walking stereotype of how the financially challenged are vicious scumbags. Joon-gyeom is prejudiced without even realizing it. What's more, because the undereducated jurors don't understand how the legal system works, they can't even explain their own relevant class experience in a formally acceptable way to Joon-gyeom.

An absolutely fantastic line during deliberation even gets at this directly, where the mere fact that the judges and lawyers are educated is used to argue they must be correct. The obviously circular logic of this statement is immediately commented on. That, right there, is how "Juror 8" establishes why jury trials are important. People, even educated smart people, can say or believe very stupid things if there's no one around to question them.

For its weak and unfortunately goofy opening "Juror 8" rebounds quickly. By the halfway point the drama is compelling, and by the ending the film has managed the impressive task of even being a tearjerker. For Nam-woo, Joon-gyeom, and everyone else involved in the trial in a formal capacity, the trial was just a temporary event. For the family of the victim? This was a matter of life or death dealing with the protection of those who can't protect themselves. All the more reason to treat the process with powerful dignity.

Available on Amazon Video and Viki