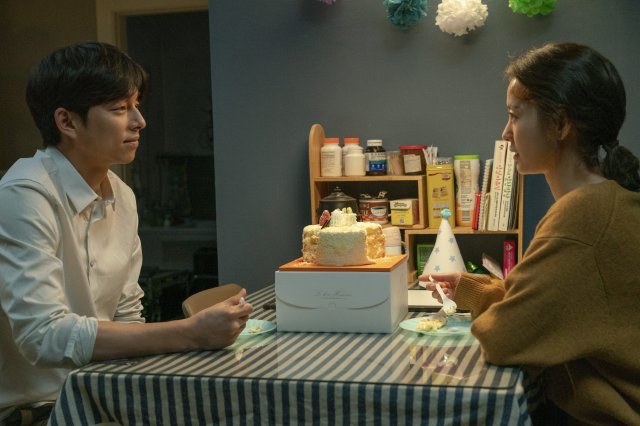 We are first introduced to the titular Kim Jiyoung (played by Jung Yu-mi) in a malaise at home. As she takes a wistful look outside, her infant daughter playing inside, we see her clear dissatisfaction with being a housewife. When Jiyoung's husband Dae-hyeon (played by Gong Yoo) comes home, he is understanding, but also helpless. Dae-hyeon feels guilty for her mental condition- something he communicates better to a potential therapist than he does to Jiyoung directly.

"KIM Jiyoung: Born 1982" as well as the novel its based on have been described as explicit feminist works. So I was surprised to watch the movie and find that the construction isn't as obviously feminist as you might think. Sure, snide sexist comments, frightening encounters with men, and hidden bathroom cameras are all problems generally experienced by women. But they're presented here less as universal female moments as they are the root causes of Jiyoung's mental degradation.

Backstory that would normally be used as the background for thriller or horror genre films is played very realistically here. From the very beginning we're given the impression that Jiyoung's problems are very solvable- provided she gets the right support. Dae-hyeon is for most of the movie too cowardly to confront Jiyoung directly because of the aforementioned guilt. His family, however, is the main obvious provoking trigger- them alongside Joyoung's unfortunate past experiences are what prove to be the ultimate mundane explanation for her strange behavior.

The editing for "KIM Jiyoung: Born 1982" is surprisingly well done in this regard. Director Kim Do-young constantly transitions between the present day and multiple past days with the only particularly obvious clue of when we are in Jiyoung's life being her hair style or her suddenly being played by a younger actress. A big part of what makes this work so well is that even to someone who hasn't had Jiyoung's life experiences, it's pretty easy to guess when, exactly, the bedroom scene takes place and why such a superficially cute scene feels so tragic in context.

"KIM Jiyoung: Born 1982" is also elevated by powerful performances. Jung Yu-mi shows exceptional range in her portrayal of a woman who is so subtly mentally unwell even her closest family members aren't sure she's sick at all. Kim Mi-kyung is excellent as the overly busy mom who only slowly comes to understand the real meaning behind Jiyoung's latest abnormal contacts. And Gong Yoo has possibly the greatest performance of his career as a good, empathetic, reflective, and ultimately sensitive husband.

The main flaw in "KIM Jiyoung: Born 1982" that I can see is that the ending seemed poorly built up to. Jiyoung is indulging in a passion we had seen precious little evidence of up until that point- in retrospect the symbolic nature of the pen is obvious, but then that's the problem. It's a broadly interpreted symbol that Jiyoung uses in an overly specific way. All the same "KIM Jiyoung: Born 1982" is beautiful introspective filmmaking- not a mystery so much as lived experience.