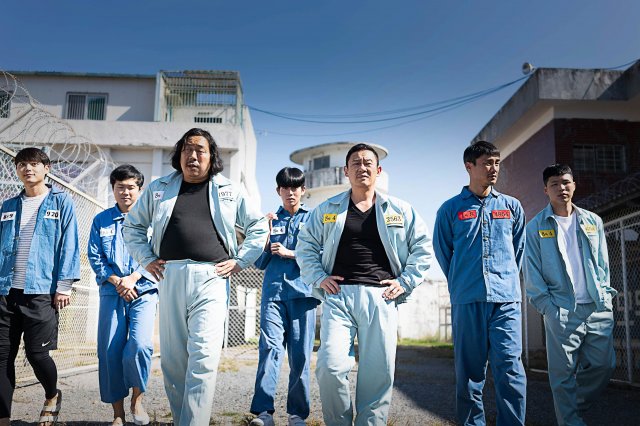 For all the way prison is romanticized in movies as being a cruel place where mean people brutalize each other in the name of power, and only the strongest survive, real-life prison is quite a bit duller than that. Fights are less about who gets to control the illicit internal drug trade and more over failing to properly apologize hard enough after bumping into somebody by accident. Pathetic luxuries like snack food which we on the outside take for granted are prized like precious metals.

While structured like a typical prison movie, writer/director Kang Tae-ho focuses "King of Prison" around these generally pitiful stakes. What follows is a surprisingly subtle character study. The titular "King of Prison" played by Lee Sol-gu might be a veteran gangster but in the immediate sense he just wants to be left alone. He's predisposed to use force only when prisoners from other cell blocks try to bully his roommates.

Lee Sol-gu is outstanding in the lead role. Despite being a short fifty year old man with a thin moustache Lee Sol-gu exudes physical intimidation and charisma that could only ever possibly come from genuinely exhausted experience. The rest of the cast is similarly excellent. with small, tortured roles as men who are more than anything else just horribly bored. Their masculinity is sometimes cruel, yet also shines with moments of genuine camaraderie.

"King of Prison" is also impressively frank when it comes to sex. The shared prison cell where most of the action takes place is littered with random sexy pictures of women from a wide variety of sources. Sad sexual release is one way of relieving the tension. One particularly striking scene has a prisoner briefly meet his wife. We then quickly see how having such fleeting contact with the opposite sex over a long period of time has really warped the prisoners' minds.

Thus "King of Prison" frames prison life quite well for those on the outside, even as the main perspective character isn't really particularly important. This is appropriate, since the main thing he does is listen to the rules of prison. Respect others as much as yourself, in an environment where it's hard to even respect yourself. It's not that complicated, amusingly enough. The main villain is bad less because he's violent and more because he's just trying to stir up conflict for no reason instead of just quietly doing his time and avoiding unnecessary drama.

But in the unnecessary drama department, I was also impressed with the down and dirty fight choreography. It helps make Lee Sol-gu look like a legitimate action star, even as he deals with relatively realistic constraints and can't just quickly shrug off any punch. There's also plenty of nice comedic touches. The final throwdown is inconclusive due to the way it's awkwardly and repeatedly interrupted. There's whiffed punches, failed schemes, and when all else fails, tattling to the guards. Such goofily plausible elements have prominence in "King of Prison" that they do not have in other prison genre films.