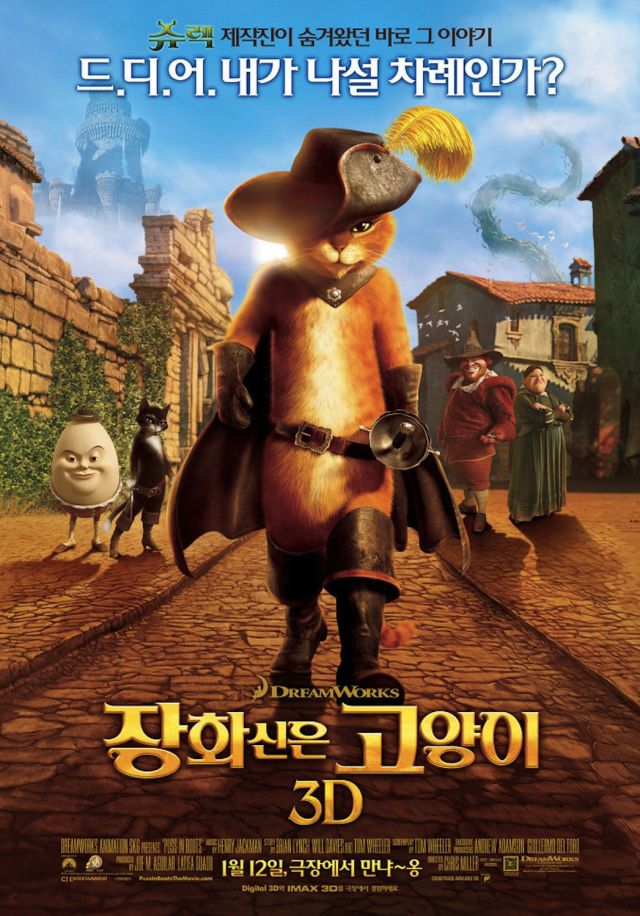 Chris Miller's "Puss in Boots" captured a third of the ticket sales this past weekend to deny "Mission: Impossible - Ghost Protocol" a fifth week at the top. With 590,740 admissions, Miller's spin-off from the "Shrek" animated series has started well in Korea and competed with three other animations in this week's top ten.

Despite having to relinquish the number one spot, "Mission: Impossible - Ghost Protocol" doesn't slip too far and finds itself at next with 362,326 admissions, itis now just short of seven million admissions. In third is Kwon Chil-in's drama "Wonderful Radio" with 225,174. That's about 100,000 less than last week but it is still going steady with a total of 781,810 since its release on the fifth. David Fincher's "The Girl with the Dragon Tattoo" is the American remake of the Swedish film with the same name. The films are based off the popular novel by Swedish author and journalist Stieg Larrsson.

Meanwhile "Sherlock Holmes: A Game of Shadows" passes the 2 million admissions mark, helped along by this past weekends contribution of 154,399. Park Hee-gon's "Perfect Game" is at six with a total now of 1,392,738. Park's film was release just before Christmas last year but since then it has been unable to really pickup the numbers or any semblance of momentum. Instead, the film has been receiving a steady run of sales and is now slowly making its way down the charts. A new Korean animation is at number seven in the form of Lee Kyeong-ho's "The Outback". "The Outback" was release in theatres on the 12th and since has had 87,383 admissions. The film is a co-production between Korea and the USA.

"White Vengeance" is Chinese film by director Daniel Lee. This history drama tells of two brothers contesting for power during the Qin Dynasty and has earned 55,498 admissions in its opening weekend in Korea. "My Way" has not lived up to its budget as it sits sadly at number nine with 45,009. "My Way" is Korea's biggest budget film but despite that it has only 2,121,331 admissions to show for its efforts. At number ten is the Japanese animation "Friends: Naki on Monster Island" down from last week's five with 36,930.