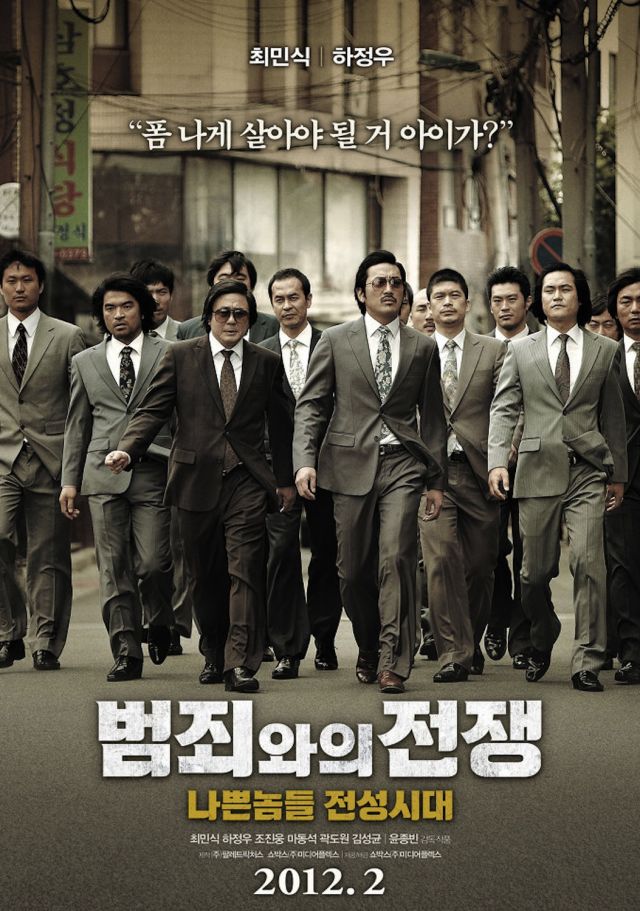 "Nameless Gangster" enjoys another weekend at the top as 829,307 flocked to watch Yoon Jong-bin's gangster film. Since its release on Feb 2nd, the film has accumulated the support of some 2,485,464 spectators and is on the verge of outshining "Dancing Queen" in the race for the top Korean film of 2012 so far.

With "Nameless Gangster" hogging over 40% of the ticket sales, it was tough for those following to report any major ticket sales. "Dancing Queen" was able to edge past "Unbowed", but still only managed to secure 13%, which translated to just under 300,000 admissions. "Unbowed" fell to third with 256,957, but has a healthy 3,096,214 total admissions to date. The Icelandic film "Legends of Valhalla: Thor" surprised at number four with 9.50% of the sales. The film is a 3D CGI 2011 film about "an over confident teen with a magical weapon and a handful of imperfect gods join forces against an evil queen and her army of giants"(IMDB).

Sang-ho's "Speckles: The Tarbosaurus" moves down one place with 116,742 admissions. Sang-ho has said that he has always wanted to create a film about dinosaurs and that animation would yield the best results for him in terms of the visuals. The film is approaching the million admissions mark but is losing steam quickly with the public. "PaPa" is also down spot as its admission count is halved from last weekend's 214,063 to 107,902. It is still one that I am very interested to catch when I can, but finding screenings with subtitles is not as consistent as one would hope for. "Star Wars: Episode I - The Phantom Menace" makes a return to the big screen and this time viewers will have the chance to experience the first film in the Star Wars saga in glorious 3D.

Steven Spielberg's "War Horse" is at eight in its opening weekend with 53,654 admissions. The Cold War mystery thriller "Tinker Tailor Soldier Spy" follows it on 44,102. Last is "Happy Feet 2", this second film seems to be failing to keep the momentum going from the first and only added 35,465 to its total admissions in Korea of 160,054.