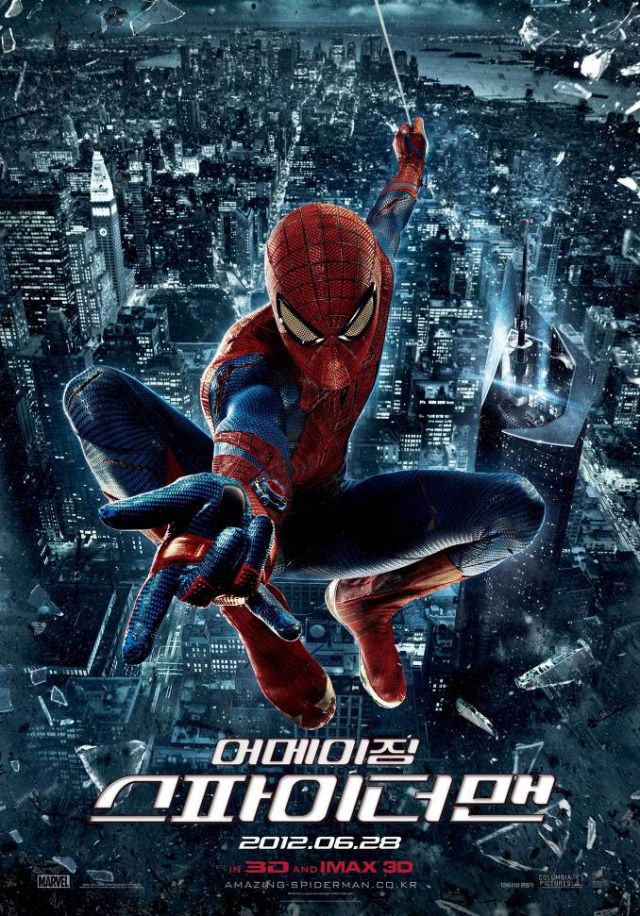 "The Amazing Spider-Man" has once again proven its popularity here in Korea, claiming the top spot in its first weekend with a whopping 1,421,163 admissions. Marc Webb is the director behind this Spider-Man origins reboot, as he attempts to add a slightly darker edge to what has otherwise been a candy-coated series so far. American superhero films general go down well with Korean audiences and "The Amazing Spider-Man" is no exception. Despite Mr. Webb's latest blowing away the competition, snatching a commanding 71.4%, there are still six local productions that, between them, held around 17.4% of the ticket sales for this past weekend.

Despite being dislodge from the top last week, Kim Dae-seung's "The Concubine" remains at number two with 122,703. "The Concubine" was forced into second last week due to Park Cheol-kwan's "Miss Conspirator", but after that Park's film slipped down to six with just 88,557 admissions. In third is the popular animation "Madagascar 3: Europe's Most Wanted" that managed to bring its total admissions count up to 1,443,569 by adding 120 ,76 from its efforts this past weekend. That's followed by Min Gyoo-dong's "Everything about my Wife" which is currently the thirds highest grossing Korean film of the year with 4,385,701 admissions.

The popular sci-fi horror "Cabin in the Woods" has made its way to the Korean cinema circuit, bring in just under 100,000 admissions as it held down the number five spot. "Cabin in the Woods" has already grossed $41,777,292 in the U.S and it will be interesting to see if Korean audiences share that enthusiasm. Park Cheol-kwan's "Miss Conspirator" took a dive in the charts, seeing its admissions count fall from 268,768 in its opening weekend to just 88,557 admissions here. That drop is followed by Jeong Seung-koo's "The Suck Up Project: Mr. XXX-Kisser" which also fell a few places from last week. "The Suck Up Project: Mr. XXX-Kisser" entered the charts at number four with 213,947 (12.00%) and now finds itself at number seven with 68,544 (2.80%) in just two weeks.