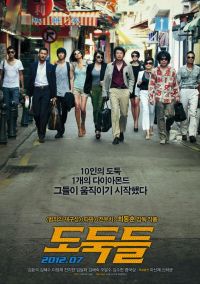 It's another huge weekend for Choi Dong-hoon's "The Thieves" as it remains the strong favorite among moviegoers. The film managed to add another 2 millions to its opening weekend efforts, placing it as the highest grossing Korean film of the year in just two weeks! "The Thieves" now has a total admissions count of 6,884,211 (54.5%), that puts it in a strong position to challenge the record breaking "The Avengers" in Korea this year.

The final film in the "Dark Knight" trilogy remained at number two, adding 617,130 to its new total of 5,524,901. In addition to these two blockbusters, the Belgium animation "Sammy's Adventures 2" snuck in to claim third with 359,350 (10.3%), followed by the fourth "Ice Age" film "Ice Age: Continental Drift". "Ice Age: Continental Drift" entered the charts last week at number three and this last weekend's numbers pushed it over the million admissions mark.

"I Am a King" is a new Korean film by director Jang Gyoo-seong, whose previous film was way back in 2007 with "Small Town Rivals". It's the untold story of King Sejong and how he deals with the pressures of being king. The film stars Ju Ji-hoon, Baek Yoon-sik, Byun Hee-bong and Park Young-gyu. At number six is another pick for the young ones with "Detective Conan : The Eleventh Striker". This popular Japanese animation held the same position last week with 72,203, but finds that 54,744 is good enough to hold that same position this past weekend. The omnibus film "Horror Stories" falls from four to seven, adding just 48,883 during the weekend to its total of just 268,305 (1.40%) admissions.

Adam Shankman's contemporary musical "Rock of all Ages" is at eight with 48,774, followed by the questionably named film "Piranha 3DD". Rounding out this past weekends top ten films is another Japanese animation "Doraemon: Nobita and the Island of Miracles". Doraemon is a huge favourite in Korea and his films never seem to go unnoticed. Still, the film is down from its entry position of seven to number ten in just two weeks, claiming just 141,108 admissions over its 109 screenings nationwide.