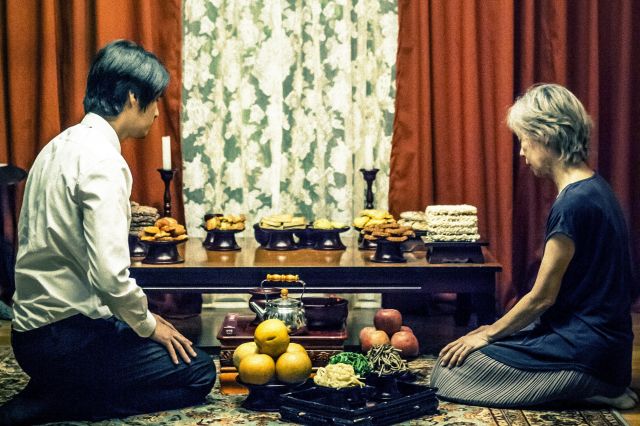 The first scene in "Land of Happiness" depicts an unfortunate series of events on the subway, back in the days before walls were installed to separate commuters from the tracks. The silent grainy closed circuit television footage is hauntingly effective, and appears multiple times through the duration of the film. But equally haunting is the distant look on the face of Min-soo (played by Ji Yong-suk), a man so spiritually unnerved it's interfering with his job of washing cars- not exactly a profession that requires people skills.

A lot of "Land of Happiness" is just played out as a mystery. What's Min-soo's problem, and why can't he talk to anyone about it? Why does he lie about where he's going, when we can see full well that he's going nowhere sinister? It was quite some time through the memorial ceremony before I could figure out Min-soo's relation to Hee-ja (played by Ye Soo-jung), the enigmatic matriach who presides over a broken home. And when that much finally clicked...well...

There's no way to get around it. "Land of Happiness" is an extremely depressing movie that nonetheless manages to squeeze out a happy ending by the time everything's through. That entire notion seems unbelievable to me, considering that "Land of Happiness" is a movie that deals with themes of suicide, occult rituals, attempted murder, survivor's guilt, and sudden maelstroms of irrational unprompted grief. By the film's close one of the principal characters is dead.

But these are all less literal events and more metaphorical expressions of Min-soo and Hee-ja's emotional turmoil. When we see Min-soo about in the world, walking, talking, and generally acting like a ghost, it's because the poor man feels like he does not belong. Min-soo feels like his very existence is a crime against the universe. See-ja treats Min-soo as if this is not true, even if she, too, has trouble coping with the world that Min-soo has inadvertently created.

That's the context in which the conclusion needs to be viewed. Min-joo's journey is one of atonement. From the very beginning Min-joo never cared about himself. What his life lacked was purpose, and indirectly as he destroyed, Min-joo is also ultimately the one who is able to give back to Hee-ja some of what she lost. The tone of this is all horribly bittersweet- but inured as I was to Min-joo's existentialist crisis by that point, the conclusion left me feeling surprisingly at ease.

As impressive as this thematic depth was I was equally impressed by how writer/director Jung Min-Kyu manages to condense the story into such a short timeframe. What's more, so much of the story here is just told by the pained expressions of the characters. Se-hee (played by Choi Young-shin) stood out in particular as a woman who relives the subway incident in moments of brief traumatic aftershock. A more optimistic film might have posited Min-soo and Se-hee as protagonists in a romantic melodrama. Instead, "Land of Happiness" simply shows us that Min-soo understands what Se-hee is feeling- and that's enough.