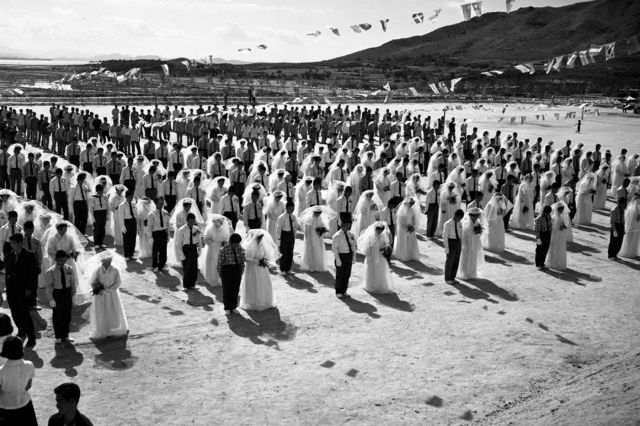 Fifty seven years ago South Korea's government created a forced labor camp in the coastal Seosan district to the southwest of Seoul. To populate this camp South Korea's government kidnapped people from the southeastern part of the country. Though some had expressed disagreeable political opinions in general these state-sanctioned kidnappings were random. "Land of Sorrow" tells the story of the people who worked the Seosan prison camp and through them, director Lee Jo-hoon tries to parse what exactly the purpose of camp was.

The mystery is a perplexing one. The Seoson prison camp, and many other prison camps like it, featured heavily in South Korean internal propaganda. Park Chung-hee's government pushed them heavily as a patriotic public works programs. Director Lee Jo-hoon shows us lots of period news footage, and in these clips, much is made of how the labor camps are working to provide a great future for South Korea's agricultural sector by developing farmland.

The obsessive attitude the South Korean government had toward promoting the camp's image takes on weirdly complex dimensions. An entire stretch of the documentary is dedicated to the prison camp's compulsory marriage system. Yes, you read that correctly. The South Korean government would bus in women and force them to live together with the men working in the camp, beating the men if either man or woman expressed resistance to the idea. Subsequently, the people we see in mass marriage ceremonies via newsreels are obviously miserable, and don't even bother to look up at the camera.

Then one day, with no explanation, the South Korean government just abandons the project. The bewildered prisoners are left behind, and decide to finish it themselves. It's at this late point in the documentary that Lee Jo-hoon finally explains the actual purpose behind the prison camp project- but I'd rather not spoil the ending. This review has already had too much plot summary and believe me, the government's motivation was so bizarre, I'm not sure you'd believe me without supplemental evidence provided by the documentary itself.

So I'll instead close this review out by discussing the obvious political themes. Until recently, Park Chung-hee was considered in popular South Korean culture to be a good dictator. Sure, Park Chung-hee was a fascist authoritarian, but he meant well. The participants in the prison camp projects have a very different view of the man and South Korea's dictatorial government. To them, the government's behavior was arbitrary and incomprehensible. Anytime they actually did something good, it was usually by accident.

So who then, was really responsible for South Korea's rise to developed country? The South Korean people. The ones who had lived through the Korean War, recognized the viability of the farm project, and stubbornly persisted in completing the job absent official support because it was of benefit to the greater good. And now? They struggle to take legal ownership of the land they worked so hard so develop. That entire aspect of the story is largely condensed into the epilogue, but the point is well made.

"Land of Sorrow" is directed by Lee Jo-hoon.