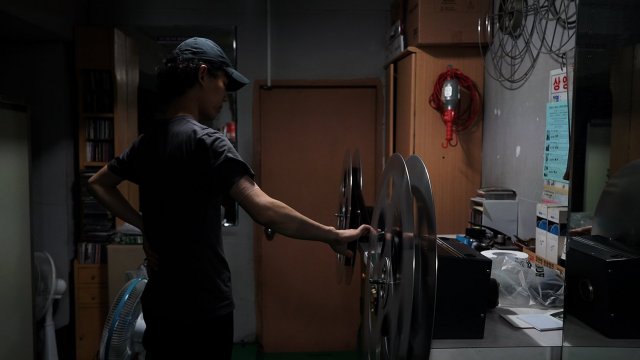 Independent film theaters in South Korea are on a downswing. Well, strictly speaking independent film theaters are on a downswing just about everywhere. The kinds of eclectic films they show don't have the benefit of massive marketing operations behind them. Most people have never heard of the movies shown at such theaters. In the "Last Scene", we watch this reality sink in as theater owners discuss past hopes of a filmgoing public that never really materialized.

"Last Scene" is mostly filmed at Garam Theater in Busan. The space has since been converted into a generic art hall with only semi-regular events, underscoring the limit of appeal for non-mainstream films. The only time anyone can really be motivated to come to an independent movie theater is for a special event, like a farewell event for a theater that's closing down. Early moments in "Last Scene" focus on movies playing to empty or nearly empty auditoriums, the lingering aspect a ghostly one.

Director Park Bae-il makes no effort to hide the fact that such theaters simply don't have a working business model. At one point we get a scene at the ticket box of Indie Space in Seoul, one of the better surviving theaters simply thanks to its central location in downtown Seoul, at the same complex as Seoul Cinema. We see a patron mistake the Indie Space box office for the regular theater one- an event that is implied to be a recurring one.

Though not an especially morose film "Last Scene" is still quite sad. We're watching people pour their hearts out about a passion for offbeat or older films that just doesn't seem marketable or popular. The effect is an isolating one. As we see construction take place outside of Garam Theater we can also see that the unremarkable location does the cinema no favors. Still, could they even afford a better one? Would it have been wise to try?

The slow pacing of "Last Scene" drags down the mood into resignation. While ostensibly a movie about movies, "Last Scene" is also a story about coming to grip with failure, and accepting that after a certain point, all you have to hold onto are happy memories. Here, those memories take the form of personal anecdotes about film, and being moved by it emotionally, and being able to make out an entirely new world through it. The greatest moment of cheer is seen through the happy faces of patrons on the great climactic closing night.

Now, of course, in the end theaters are just a distribution mechanism. Independent film in South Korea is doing quite well thanks to secondary distribution services. But "Last Scene" is as acknowledgment that the quiet, lonely independent theater, with its inevitable obscurity, marks a very different kind of experience than just watching a movie at home. Whether that experience is worth preserving, well, "Last Scene" doesn't really make a strong case as far as that goes. The movie just recognizes what this atmosphere is, and how some are hurt for losing it.