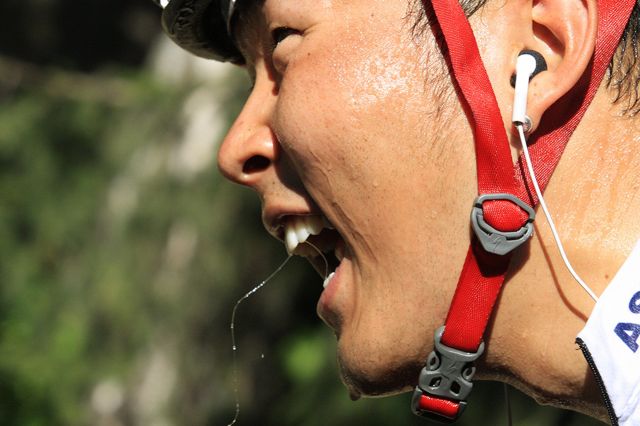 Way back in 2006, Yun-hyeok was a man in his early twenties who was diagnosed with cancer. Considering Yun-hyeok's slavish devotion to physical fitness the diagnosis seemed an especially cruel joke played on him by the universe. Through time and tide, Yun-hyeok has to decide what to do with his apparently limited time in life. He ends up deciding to achieve his lifelong dream by whatever means necessary, and competes in the 2009 Tour de France. "Le Tour: My Last 49 Days" is a documentary of footage shot by friends who went with Yun-hyeok on his final journey.

While I had of course heard of the Tour de France before watching this movie, I had little notion of what it actually was beyond a sporting event involving bicycles. "Le Tour: My Last 49 Days" gets into the details, and it soon becomes clear why the idea of competing appealed to Yun-hyeok. Over the course of the Tour de France, competitors see practically the entire country. France actually has very beautiful scenery. That's something else I didn't know before watching the movie, since it seems like the only part of France anyone talks about is Paris.

France also has a lot of hills, and it's pretty agonizing watching Yun-hyeok climb them. That he succeeds in doing so is testament to the man's iron clad sense of will and determination. I would not generally expect a movie about a cancer patient who inevitably and predictably dies at the end to be inspiring but "Le Tour: My Last 49 Days" is surprisingly successful on this score. It's no wonder friends and family were willing to go to so much effort to help him.

Mind, the logistics of the Tour de France are nearly as difficult as the course itself. Having spent half a year traveling a foreign country myself having to get by solely on my imperfect use of a second language, it was easy to identify with Yun-hyeok's team struggling to, among other places, find a place to sleep at night. In this way "Le Tour: My Last 49 Days" is, in addition to being an inspirational cancer story, a surprisingly accurate description of long-term foreign travel.

History is the main enemy of this film. It should come as little surprise that Yun-hyeok idolized Lance Armstrong. This is, to say the least, a tad awkward in the modern day where we know Lance Armstrong as a cheater who mocked his earliest critic for having a dead child and cynically exploited his name under the guise of good workswhile doing relatively little to actually promote charity.

Yet it's hard to dwell too much on that aspect while actually watching "Le Tour: My Last 49 Days" and seeing the genuine joy on Yun-hyeok's face. It's kind of like watching a genuinely positive version of "The Fake". So what if the cult of Lance Armstrong was a lie, if it was able to give Yun-hyeok the encouragement to live every moment like it was his last? Difficult moral questions, yet even-handed presentation when it comes to the actual outcomes. I like that.