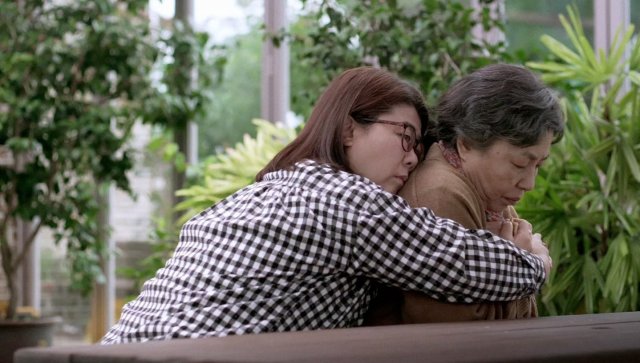 In the third part of the "Let Us Meet Now" omnibus Jeong-eun (played by Lee Jung-eun of "Parasite" fame) is an older woman working two jobs to support her even older mother, who is suffering from dementia. The irony of such a story appearing in an omnibus that's ostensibly about North Koreans is dripping. It's little surprise that this story, 'Hello', came from director Boo Ji-young who made the union-driven film drama "Cart" a few years back.

'Hello' is the strongest individual section of the omnibus for exactly that reason. Most of the action just consists of Jeong-eun suffering through her daily routine while occassionally speaking to the disembodied voice of Lee Sang-hee in a thick North Korean accent, plaintively begging for help in locating her son. Both the humor and the drama in this piece derives from their differing alien situations and problems which are hard to compartmentalize. The ending which discovers their common ground is morose, relatable, and oddly enough, surprisingly inconclusive.

'Can We Live Well' by director Kang Yi-kwan is in much more ambiguous territory because...well, mostly because I can't really figure out what was even going on. There's this couple who are moving furniture around, they fight about a bunch of little things, then there's a dance sequence out of nowhere. That's really the whole thing. It barely even qualifies as a story. And I'm still not sure what any of it has to do with North Korea, save for the random television broadcast at the end.

My best guess is that the story was supposed to be about bridging gaps. That idea is much more well done in the first segment of the omnibus, 'The Driver', which deals with the titular truck driver Seung-min (played by Bae Yoo-ram), a generally lonesome guy who delivers foodstuffs to the Kaesong Industrial Complex. The cloud hanging over that story is obvious, as the Kaesong Industrial Complex has long since closed down, and efforts to bring it back under the current government have been piecemeal.

The basic argument made by director Kim Seo-yoon is that contact with people, however fleeting, breeds familiarity. The crush Seung-min falls into with North Korean Sook-hee (played by Yoon Hye-ri) obviously can't go anywhere but that doesn't make the time they spend together superfluous. Well, no, the time they spend together is superfluous, it's just that it's not super antagonistic. So if only for that moment, North Koreans and South Koreans are not enemies.

While 'The Driver' isn't quite as good as 'Hello' a lot of the preference factor there is just a matter of personal taste. There's more substance to the social criticisms in 'Hello' but 'The Driver' has no pretension beyond being merely a fluffy cute story about the normal people who worked at the Kaesong Industrial Complex. Who 'Can We Live Well' was supposed to appeal to I have no idea, although it's perfectly watchable, and you probably might as well since its between the other two.