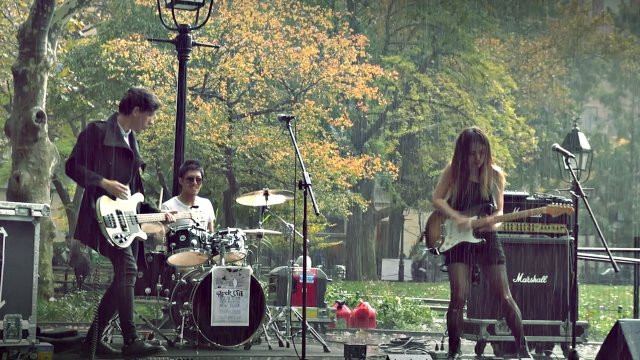 Director Jeremy Joey first started filming "Life is a Dream We'll Wake up and Scream" back in 2012. He wanted a comprehensive look at the indie rock scene in the Hongdae district of Seoul by marking the journey of three bands trying to turn their passion into a profession. Though two of the three bands were successful, the documentary is bittersweet. In 2018 band members can be seen discussing an independent South Korean music scene that's not what it once was.

"Life is a Dream We'll Wake up and Scream" is an anthropological look at a way of life that's slowly going away. But more notably, in contrast to most independent musical documentaries I've seen, it's not especially flattering. The three bands agreed to the initial filming with little pretensions and over the years it's striking how little effort they make toward trying to seem cool. Some particularly dorky scenes show band members showing enthusiasm about talking to girls.

Wasted Johnnies sticks out most for having both a Frenchman and a woman in the band. Yet in interviews they never talk about their token roles, instead discussing modest ambitions. Director Jeremy Joey cuts away to another band, and then a year or two later we see woman giving corporate classes on how to play guitar. The Frenchman, in markedly improved Korean, gives a meandering ominous talk about the Hongdae music scene, particularly so since he's no longer in the band today.

The Roosters don't even exist anymore, though the impression is given that after their trip to the United States they may have realized there wouldn't be any higher novelties. Rock N Roll Radio muddles through to the present day, although their most distinctive scene too has little to do with music. One of the band members is just having a birthday party for his kid and...everyone is there. All these serious looking musicians who don't look like they belong there, and yet they are.

Of course, all of this leaves one rather glaring and obvious flaw in "Life is a Dream We'll Wake up and Scream" namely that for a movie about musicians there's surprisingly little music. I had to YouTube the band names to get any kind of decent idea what their styles are actually like. Even though they constantly talk about their evolving attitudes toward music as a lifestyle choice how this changing philosophy affected their actual music is left maddeningly unclear.

Although that's rather besides the point. Like I mentioned before the main value in "Life is a Dream We'll Wake up and Scream" is anthropological and personal. Director Jeremy Joey doesn't exposit big dramatic stories explaining why people leave bands. He examines the less flashy but nonetheless critical stories explaining why people stay through all the minor setbacks and psychological hits. One notable scene features a band showing up on a commercial music variety show program- but if you look for these bands on YouTube you're almost certainly going to be watching EBS footage. That really says it all right there.

"[HanCinema's Film Review] "Life is a Dream We'll Wake up and Scream""
by HanCinema is licensed under a Creative Commons Attribution-Share Alike 3.0 Unported License.