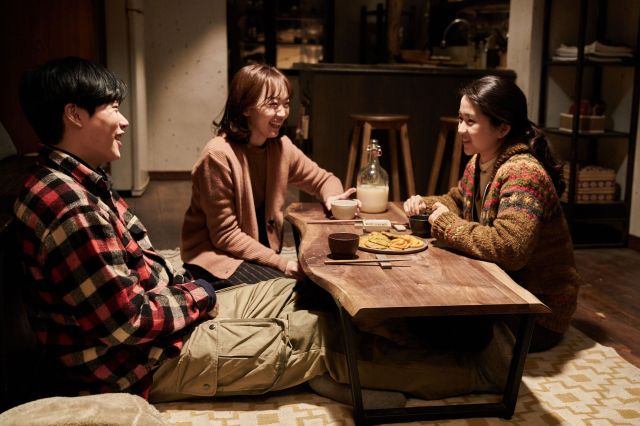 Hye-won (played by Kim Tae-ri) was raised on a small farm out in the countryside. As a teenager, Hye-won had ambitions to do something greater with her life, but after going to college and getting various jobs in the city...well, nothing Hye-won did seemed to have much point. So Hye-won moved back into her old home, all alone. Well, she does have a couple of friends her own age. Eun-sook (played by Jin Ki-joo) is the woman. Jae-ha (played by Ryu Jun-yeol) is the man. There's also a dog. And there's also the most important friend of all- delicious fresh food.

That probably doesn't sound like much of a plot and really, it isn't. "Little Forest" is not the story of how Hye-won comes to embrace rural living. At the start of the movie, she has already done so. Far from questioning the rationale of her decision to return to the country, Hye-won mostly just thinks about what food she can make this season. Whether it's winter, spring, summer, or autumn, there's always something coming into bloom.

The closest "Little Forest" gets to conflict is Hye-won's ambivalent relationship with her deceased mother (played by Moon So-ri) in flashback, who always had a warm, loving smile even in passive-aggressive moments. Hye-won lost her father at an even younger age than that. That feeling of loss resonates deeply throughout "Little Forest" as we see Hye-won cooking. Hye-won learned everything from her mother, so any time Hye-won wants to make something special she has to rely on those old memories to figure out how to do it.

The sentiment therein is frequently touching, and even optimistic, owing to the recurring theme of renewal. As seasons change, so too does the variety of available fresh ingredients alter. We also see in flashback the industrial sameness of the food that Hye-won was forced to consume in the city. Then there are flashbacks within flashbacks, as the Hye-won of city life sees some form of organic material and thinks back to how her life experience has given her a markedly different perpsective on what such and such dressing or creature even is.

Renewal is also explored as we see Hye-won sharing her food communally with Eun-sook and Jae-ha, further empowering their bond of friendship. Granted this all seems a tad off, considering the abrupt unexplained decision Hye-won makes near the end. But then again Jae-ha has a good thematic echo with Hye-won's mother when he notes that really understanding a person means being able to quantify their actions without explicitly stated verbal reasoning.

Not that he used anywhere near that many words, of course. "Little Forest" is all about understatement. Believe it or not "Little Forest" is actually an extremely loud movie, compared to the original Japanese version, which was twice as long (two movies) with maybe half the dialogue and even less plot. The sentiment, of course, remains the same. Live the life you want to lead in peace. There's no sense worrying too much about what other people think.