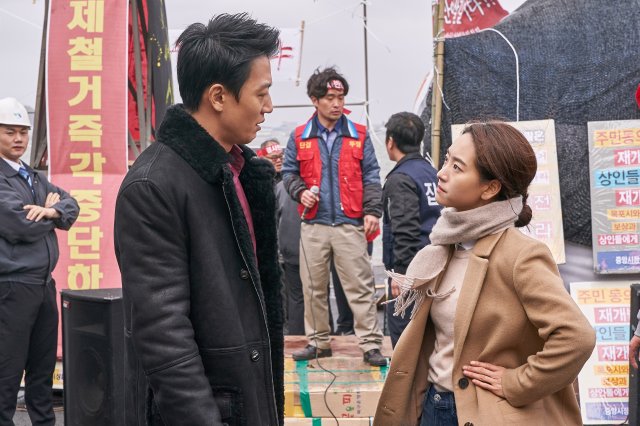 Se-chool (played by Kim Rae-won) is a gangster who is obviously in the wrong movie. Rather than just do his job, and break up the labor strike in Mokpo port, Se-chool instead decides to try and impress labor organizer So-hyeon (played by Won Jin-ah) and Bo-yoon (played by Choi Moo-sung), a respected working class man who's running for the legislature. They are naturally perplexed by Se-chool's dogged efforts to prove that he is a very nice guy.

That's the main joke in "Long Live the King" is just the outrageous ironic contrast between Se-chool's alleged job and his public persona. Accentuating the absurdity is the fact that Se-chool is obviously not very smart. So-hyeon spends most of the movie convinced Se-chool is trying to run some kind of scam and strictly speaking he is, in the sense that Se-chool is a man and So-hyeon is a woman. Bo-yoon is more easily convinced, given the lack of sexual tension.

Bear in mind that it still takes something like half the movie for Se-chool to get enough of Bo-yoon's trust that he gets asked an extremely unusual favor. Now, if you've read any synopsis for "Long Live the King" than you already know what the favor is- which I thought was a bid of an odd marketing decision. Up until the favor happens, "Long Live the King" is funny mainly as an ineffective romance, wherein our intellectually challenged hero struggles to predict obvious emotional reactions.

After the favor, "Long Live the King" becomes a lot less funny, because instead of adapting Se-chool's oafishly heroic personality to the new scenario, director Kang Yoon-Sung starts to treat sinister politician Man-soo (played by Choi Gwi-hwa) as a serious villain. The problem with this thinking is that Man-soo is every bit as much a buffoon as Se-chool is, he just wears a nicer suit. There was a real missed opportunity for satire here to just play the entire political aspect of the story as a farce where Se-chool has the advantage because he at least actually wants to be a good person.

But then those are awfully high brow expectations for an intrinsically low brow comedy, wherein the main character is simultaneously both hypercompetent and a try hard. Other generally goofy jokes include- those three fat guys, who are constantly described as such for the entire movie. The hero's nonchalant after the fact reaction to the movie's high budget setpiece. Constant confused reaction shots from people who aren't sure how to respond to whatever weird thing Se-chool is doing at the moment. Ma Dong-seok just popping up out of nowhere.

The jokes, while repetitive in tone, are still varied enough to remain funny throughout. Assuming you're into that kind of humor anyway. If you hate the first few reaction shot centered jokes my guess is you're going to hate all the other ones too, and the remainder of the story doesn't have enough depth or wit to ever really rise above just being mostly funny. Still, I thought it was pretty good.