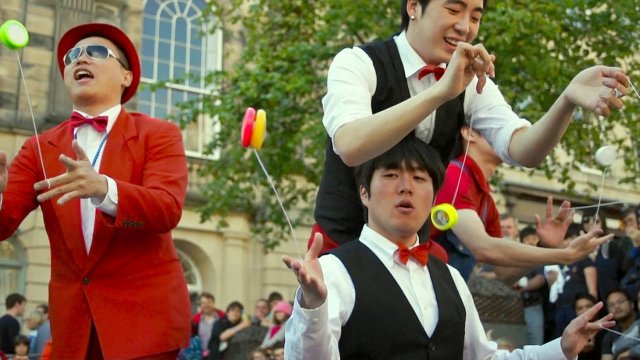 My first response to "Loop Dreams" was a sort of mild bewilderment. A documentary about yo-yo trick artists? Really? I've seen plenty of self-indulgent documentaries by young people overestimating how interesting their lives are. But then I've also seen plenty of good documentaries by young people who correctly estimate how interesting weirdly specific aspects of their lives are, and the only way to know which is which is to watch them.

Well, I'm happy to report that "Loop Dreams" comfortably falls into the latter category. A big part of it is just the movie's absurd scope. We start out with footage from the mid-aughts of various regional yo-yo trick competitions among high schoolers and yes, such things do exist. And it's hard not to get swept up in the sheer determination of these schlubby looking teenagers, all of whom are completely focused on crazy-looking yo-yo tricks that can and do attract a crowd.

Naturally this prompts similarly crazy thoughts. What if we do the yo-yo tricks in public, hoping to entertain people enough that they give us money? While a big point is made about the various South Korean yo-yo champions going to the Edinburgh Festival Fringe, this trip actually ends up feeling more like a starting point than a beginning. It's a proof of concept. Yes, it is possible to get money by being really good at yo-yo tricks. But can you make a living doing that?

The short answer is no. The long answer is, we won't know until we try. Director Ko Du-hyun does not attempt an overly romantic presentation. At every reasonable point of discussion, the various yo-yo artists depicted admit that there is only so much that can be accomplished with yo-yo tricks. They know that passion doesn't necessarily translate into a long-term future. But they weigh the opportunity costs of continuing the hobby seriously, and make decisions accordingly.

"Loop Dreams" spans nearly fifteen years and we can see the world change around these artists. They grow into adults. The footage taken of them slowly improves in quality. I was struck how nobody at the Edinburgh Festival Fringe was taking videos of the tricks with their cameras- because cell phone cameras weren't a thing yet. They do tricks for the crowd solely for fleeting applause and the smiles of children. Some of the yo-yo artists branch out into balloon animals for the same reason.

Is this a practical way to live your life? No, but that's the whole point. You should live for passion. You should do what you want to do, what makes you and the people around you happy. If you have to work hard for it, that just proves it's worth the effort. By the end, as we see a new generation of yo-yo artists take shape, it's telling how they, much like their forebears, are convinced they're not really that good, despite demonstrating obvious, impressive talent right there on-screen. It's kind of sad, really, to think about how they'll probably never know how cool they really are.