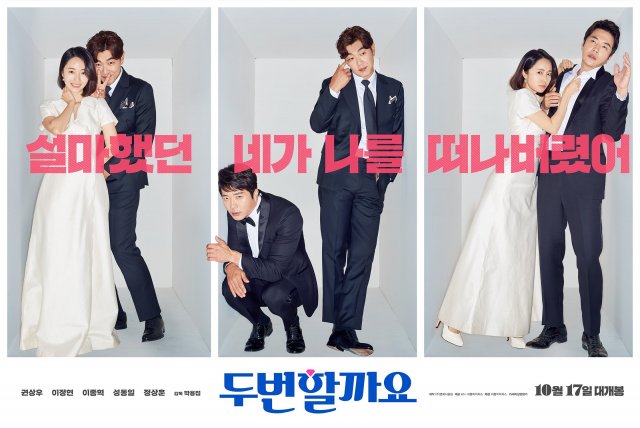 In the opening scene to "Love, Again" we see Hyeon-woo (played by Kwon Sang-woo) and Seon-yeong (played by Lee Jung-hyun) having a bitter, meaningless argument. What starts out as a dare gets played out for real as the two stubbornly decide to turn their public marriage ceremony into a public divorce ceremony. During this scene Hyeon-woo visibly shows signs of realizing that this was a terrible idea. Seon-yeong is bolder, mainly because she is more afraid of losing the argument.

These two are the shockingly immature lead characters for this romantic comedy. What allows "Love, Again" to remain charming in spite of the obvious personality defects of its protagonists is that writer/director Park Yong-jib is fully aware of how generally unsympathetic these two are. Their love story is perversely believable because they have trouble getting along with other people. Hyeon-woo is diffident and evasive at his job marketing underwear while Seon-yeong's translation job underscores how she prefers talking for people rather than to them.

But what really contrasts the antisocial tendencies of the lead characters is Sang-cheol (played by Lee Jong-hyuk), a kind, gentle veterinarian who rather inexplicably is able to patiently endure friendship with both of them. What makes the irony of this even greater is that Hyeon-woo and Seon-yeong are, themselves, deliberately seeking out a new friend. Without each other their social life is fairly pathetic, as we see when Seon-yeong contrives excuses to spend time with her ex-spouse while not doing anything about the character defects that led to the breakup in the first place.

"Love, Again" is functionally just a comedy about a frivolous divorce. It's a surprisingly effective date movie because the humor constantly runs on the idea that sure, maybe you want to break up with a significant other because they're annoying. But what if you were also the annoying person? My favorite subtlety is how the movie goes back and forth between which of the two leads is intended to be sympathetic. That's exactly how people tend to think of their own relationships, never realizing until too late that actually mistakes were made on both sides.

This makes for a delightfully subversive take on romantic comedies which try to minimize character flaws instead of acknowledging that the flaws are what make us who we are. But at the same time writer/director Park Yong-jib can't help himself when it comes to falling into genre tropes. This is disappointing since most of the movie is entertaining precisely because it's not clear whether Hyeon-woo and Seong-yeol should be together as a couple at all.

Still, there are just so many good little bits in here, where Hyeon-woo and Seong-yeol are working their passive-aggressive charms on co-workers and passersby all the while overestimating their own cleverness. Admittedly writer/director Park Yong-jib does this as well at points. The twist to the climactic motorcycle scene, while certainly amusing, can't override the inherently toxic nature of the underlying motivation. The main problem with "Love, Again" is that its ideas, while subversive, challenging, and funny, can't really defy genre expectations.