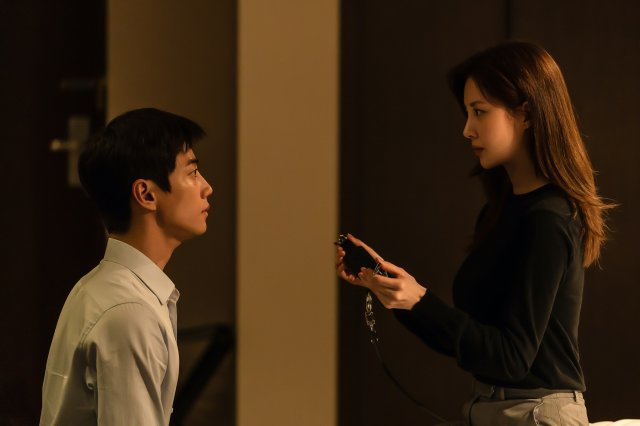 Ji-woo (played by Seohyun) is a fairly competent employee at a company that deals a lot in children's programming. The somewhat confusingly named Ji-hoo (played by Lee Jun-young) is a new hire at that company. This similarity inspires some weird sexist comments from Team Leader Hwang (played by Seo Hyun-woo) although this is mostly ignored for the sake of a greater plot arc about dom-sub culture. Ji-hoo is into it, mainly as a sub, and Ji-woo is only just learning.

"Love and Leashes" is a fairly wholesome primer on what exactly dom-sub culture is, with Ji-woo's initial ignorance on the topic being used as a device to explain how it works. Basically, in a sort of pseudo-sexual excitement, the dom degrades and even punishes the sub for minor infractions. Director Park Hyeon-jin makes a big point of acknowledging how mutual consent mechanisms such as safety words are critical to preventing dom-sub eroticism from being used for nefarious purposes by perverts.

Ji-hoo is not, to be clear, one such pervert. He's a genuinely sweet guy and Ji-woo's a bit baffled as to how his adoring and affectionate behavior could be seen with hostility by a previous ex-girlfriend Hanna (played by Kim Bo-ra) who was not emotionally abusive in a playful arousing way. As it turns out, a good dom has to be both incredibly cool and self-assertive yet also mature enough to appreciate that there is a difference between a personal life and a private life. Ji-woo may not get dom-sub culture, but she doesn't judge Ji-hoo for enjoying it- making her an ideal dom.

"Love and Leashes" is almost presented in a pedagogical manner, as the story goes through the motions of showing how Ji-woo learns the proper boundaries of being a dom, being assertive in a role-play manner while also being careful not to hurt Ji-hoo any more than he actually wants to be hurt. We can see how the experience is therapeutic for both of them. Ji-woo sublimates her frustration at Team Leader Hwang's sexism, while Ji-hoo is energized by trying to live up to Ji-woo's standards.

Given how little actual story there is I'm still not sure how "Love and Leashes" manages to be two hours long. There's an entire incredibly underdeveloped subplot about Ji-woo's best friend Hye-ri (played by Lee El) flirting with the idea of dom-sub culture while ignoring the eager younger guy right in front of her. The final conflict also hinges hard on a pretty extreme coincidence to thrust Ji-woo and Ji-hoo's relationship in trouble, when the perfectly good conflict of whether dom-subs can be equal romantic partners is right there.

Ultimately, though, "Love and Leashes" is a film less about clear thematic consistency as it is an excuse to see Seohyun and Lee Jun-young in an erotically charged romance. Somewhat impressively, Seohyun actually comes off as the sexier quantity despite Lee Jun-young getting straight-up shirtless scenes. Such is the emotional eroticism of an attractive, hypercompetent woman whose validation a man desperately craves- but different strokes for different folks.