[HanCinema's Film Review] "Love As Much As Pain" 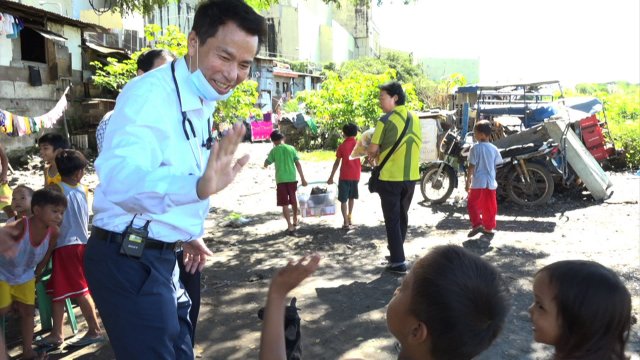 I was reading an article recently about cost-effective philanthropy. The way it works is, that in some circumstances, making lots of money and then donating it is more efficient than trying to volunteer work yourself. I thought about this idea a lot during "Love As Much As Pain", a documentary about the missionary doctor Park Nu-ga, a man who offered free medical checkups and vitamins to obscure villages in the Phillipines. I thought about how ridiculous the base idea was- that the mere promise of money would be enough to get doctors out to these underserviced areas.

"Love As Much As Pain" underscores the absurdity of this premise from the very first scene. We see Park Nu-ga driving around in his all-terrain vehicle in an area without roads, asking whatever random people he runs into if they need a medical checkup. His vehicle stalls in the mud, and Park Nu-ga is stuck in this remote location for days grimacing about his lousy situation. You think a money-obsessed doctor is going to want to put up with this kind of work?

What makes the situation slightly tolerable for Park Nu-ga is an offhand moment when he watches a bunch of naked children run around splashing in the water having the time of their lives. Park Nu-ga can't help but give a slight smile at this situation, thinking that's what makes it all worth it. Because really, he's not in this line of work for money or even fame. Park Nu-ga died before "Love As Much As Pain" was even completed, the long suffering victim of cancer.

"Love As Much As Pain" doesn't dwell on the details of that. Or at least, no more than Park Nu-ga himself does. The man knows he's dying, and a lot of the time it's not something he can rightly avoid. The pain is inevitable. He has a family back home in South Korea too. So why does Park Nu-ga insist on spending his remaining days working far from home in a foreign land, helping relative strangers?

Well, because it's the right thing to do. Much like the minister it profiles, "Love As Much As Pain" is firmly grounded in Christian ethos. Every moment of Park Nu-ga's journey is an argument to why his work is important. Sure, he's going to die. It's his time. But what about all the people he runs into in the Phillipines? The ones with gruesome looking but easily curable conditions? The ones who weren't lucky enough to go to medical school? What about them?

I appreciated how director Lim Jun-hyun did not make Park Nu-ga's patients out to be particularly pathetic. Indeed, one of the central supporting characters is a Filipina doctor who, inspired by Park Nu-ga's example, decides to continue his work by herself. There's no sense of vision or ambition here- we just see images of a doctor who helps sick people because that's why he became a doctor. And really, isn't that the best possible reason?

"[HanCinema's Film Review] "Love As Much As Pain""
by HanCinema is licensed under a Creative Commons Attribution-Share Alike 3.0 Unported License.