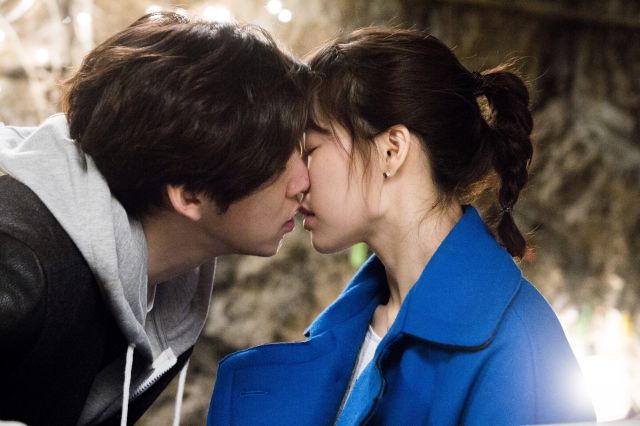 Jeong-hoon (played by Yoon Kye-sang) has to go to his ex-girlfriend's wedding. Why does he have to go? Because uh...society I guess? No, in all likelihood it's because Jeong-hoon hates himself for being a failure at romance and wants to bathe himself in misery. That's when he meets Si-hoo (played by Han Ye-ri), a woman who is also bitter and resentful about her implied failures in life. Si-hoo moves beyond just self-hatred though- she has an actual plan for revenge. Unfortunately it's a pretty stupid plan.

"Love Guide for Dumpees" sort of looks like a romantic comedy. It goes through all the right narrative motions. What distinguishes the film from most of the genre is that the story is pretty genuinely mean-spirited. You know how everybody says you get over your ex by living a happy fruitful life without them, and this is totally the method by which you can get a new significant other? How many of you have ever actually wanted to get over an ex by pretending to be happy when you obviously aren't?

That's the attitude Jeong-joon and Si-hoo embody. They don't want to be happy. They want to be angry and grumpy. They don't trust feelings, so they end up coming up with this kind of pseudo-contract where they can have a relationship without actually having a relationship because that's what bitter rejected people do. They want to feel like they deserve love without actually having to give love in return because that's how they were hurt.

The conceit is a pretty simple one and for the most part writer/director Ha Ki-ho never really betrays that essential part of the tone, even if the story's overall trajectory is fairly predictable. What ends up doing more damage to "Love Guide for Dumpees" is that most of the time it's just not all that funny. Weirdly, Yoon Kye-sang and Han Ye-ri have much more compelling chemistry when they hate each other than when they start to feel more emotionally attached.

This much makes sense because the most interesting material in "Love Guide for Dumpees" is frontloaded. Initially the movie is a dark comedy that swirls around taboo questions like date rape and suicide as possible solutions to heartbreak. This material is incredibly morbid, and it's a credit to the performances of Yoon Kye-sang and Han Ye-ri that their characters are able to maintain any level of sympathy.

Contrast that with the main part of the movie that's been featured promotionally- how Jeong-hoon and Si-hoo end up using a free drink card from A Twosome Place to define their non-relationship. That, by the way, is probably one of the weirder product placements I've seen in recent memory, although really, there's not generally any such thing as ineffective product placement so A Twosome Place probably got their money's worth. Likewise, if all you're looking for is a romantic comedy, "Love Guide for Dumpees" will fulfill that very weak qualification. There's not much left for anyone else, though.

"Love Guide for Dumpees" is directed by Ha Ki-ho and features Yoon Kye-sang and Han Ye-ri.