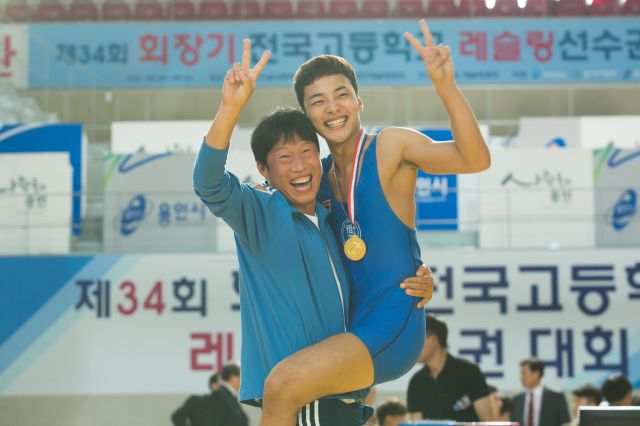 Initially the narrative arc of "LOVE+SLING" seems obvious. Seong-woong (played by Kim Min-jae-I) is an aspiring Olympic wrestler. He's coached by his father, the ever cheerful single dad Gwi-bo (played by Yoo Hae-jin), and is in an as-yet still platonic relationship with obvious love interest Ga-yeong (played by Lee Sung-kyung). They're childhood friends, what with Ga-yeong being the middle daughter of Gwi-bo and Seong-woong's neighbors Seong-soo (played by Sung Dong-il) and Mi-ra (played by Jin Kyung).

By the way, in case you're unfamiliar with those names, this is an absolutely fantastic cast. The three leads demonstrate surprisingly complex emotional reactions to some fairly bog standard situation comedy tropes. Well, all right, I write that, but at the same time, you're probably not going to guess the utterly bizarre conflict that ends up springing from Ga-yeong's weirdly creepy confession to Seong-woong. But even looking past that, Sung Dong-il is excellent as the generally clueless drunk, as is Jin Kyung who treats Gwi-bo like a girlfriend, and even little Lee Han-seo gets some great one-liners as the precocious youngest daughter.

But back to that weirdly creepy confession. Initial goofiness notwithstanding, over time I came to realize that "LOVE+SLING" actually has a pretty substantial message on the importance of dreams. Specifically, having the right kinds of dreams. From the beginning we can tell that Ga-yeong's dream is stupid because it hinges on the actions and feelings of other people. This is unrealistic, because other people cannot be controlled.

This bleeds over into the other two characters as well. Seong-woong is so grumpy that he apparently can't have his dream that he starts to turn on his dad. The main substance of the complaint? That Gwi-bo's dream is also unrealistic, for the same reason Ga-yeong and Seong-woong's dreams are unrealistic. It's a rude awakening for Gwi-bo that's made all the more stark by how he is a perfectly happy, normal, and well-adjusted guy. It's just, his dream is really dumb. That's the conflict and the source of most of the humor.

One factor I especially liked was how Gwi-bo has a secret that he could reveal at any point to crush Ga-yeong's dream. While the prospect of this revelation is toyed with and seriously discussed, ultimately, all three main characters have to find their own path instead of relying on the others to create their happiness. That makes for a really great narrative of self-discovery with refreshingly little emphasis on sexuality. This makes "LOVE+SLING" a bit of an anti-romantic comedy.

Oh, but rest assured, there's plenty of homo-eroticism. Because Gwi-bo and Seong-woong are both wrestlers you see. Yeah I know that humor's a bit low but it just comes off so great in context. More movies should have big comedic setpieces take place in the gym with everyone wearing matching leotards and making exaggerated grunting noises. And let's not forget Seong-woong furiously chugging all that milk as fast as possible- or even just the subtler moments, like Gwi-bo and Mi-ra haggling with the butcher. "LOVE+SLING" is an excellent movie, on every level.