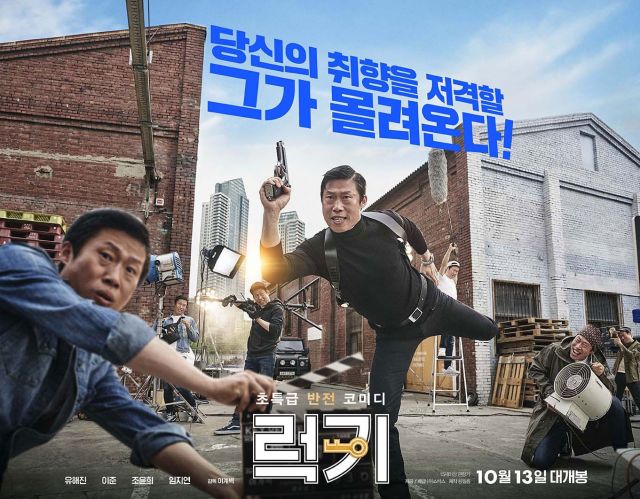 Hyeong-wook (played by Yoo Hae-jin) is a cool, stylish, skilled man whose work is violent in nature and of generally dubious legality. Jae-seong (played by Lee Joon) has very different plans in life- he's chronically out of money, and not doing so hot career-wise either. One random mishap at the bathhouse, though, ends up wildly reversing the fortunes of these men. All of a sudden both have to make sense of a wildly different life situation in "Luck.Key", a remake of the Japanese comedy film Key of Life.

Yoo Hae-jin, a reliable supporting performer in a large number of Korean films, finally gets a leading role and it's an excellent parallelism for Hyeong-wook's character arc. Hyeong-wook starts this movie out with nothing, and the man experiences sheer chronic joy discovering that he has amazing talents. More than that, though, Hyeong-wook is grateful to have the opportunities necessary to use these talents to give joy to other people. His efforts, even when painful, are good-natured enough to always warrant a smile.

Hyeong-wook's love interest, Rina (played by Jo Yoon-hee) is apt back-up for Hyeong-wook's role. Rina does the decent thing and helps Hyeong-wook out with little expectation of reward. As Hyeong-wook begins to remember what an increasingly impressive man he is, so too does Rina gain both material and psychological benefits simply from being his friend, because Hyeong-wook is just that cool a guy to be around.

If there's any weakness to "Luck.Key" it's that by comparison Jae-seong is a rather unsympathetic secondary protagonist. Even when we get past the whole issue of Jae-seong stealing Hyeong-wook's life, Jae-seong happened upon Hyeong-wook in the middle of a job, and consequently ends up stalking Eun-joo (played by Lim Ji-yeon) a young woman who has some rather odd hobbies. Not that this is any excuse for secretive leering on Jae-seong's part.

"Luck.Key" is a comedy where the humor is generally focused on the strangeness of its situations. Take the way Hyeong-wook reacts to the background noise of Jae-seong's life, and how Jae-seong does likewise with Hyeong-wook's life. Objectively speaking Hyeong-wook's apartment is a much weirder place, especially considering what's going on with Eun-joo, yet time and again it's always Jae-seong's apartment that's pathetic and depressing in humorous ways. For all that, Hyeong-wook makes the best of his situation and is never beaten down by setbacks.

There's just something so thoroughly ennobling about this guy making a conscious decision not to bother with revenge. Sure Jae-seong was being selfish, and only his suicidal impulses offer any kind of mitigating factor. But look at all the fun Hyeong-wook had in the meantime. Friends, tricks, and jokes are all worth the effort in their own right. The final setpiece, too, gets its best laughs from an ignorant character stumbling into a perfectly logical environment not their own, and then things somehow work out. "Luck.Key" has a lot of fun style that makes the film easy to recommend.