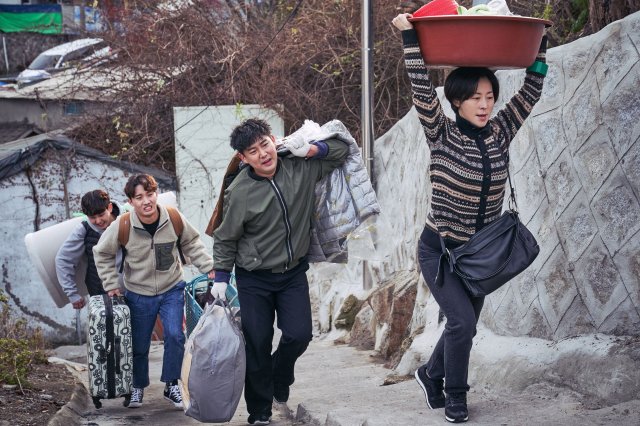 The titular "Lucky Chan-sil" is played by Kang Mal-geum, and is a woman in a mid-life crisis. It's actually not exactly the kind of mid-life crisis you'd expect- Chan-sil was perfectly happy living life as a film producer whose job security was entirely dependent on the reputation of a film director with whom she had worked long-term. But one bad stroke of luck and Chan-sil is suddenly stuck working for Sophie (played by Yoon Seung-ah), a younger and more naive actress who offers Chan-sil work as a house cleaner completely oblivious to the obviously demeaning connotations of such work.

The irony of "Lucky Chan-sil" is that Chan-sil herself does not view the work as deamaning. Neither does writer/director Kim Cho-hee, who just matter-of-factly treats Chan-sil's life experiences as economic reality for a woman pushing forty. The understated grimness of "Lucky Chan-sil" is a fairly big part of the movie's appeal. Though I am neither the same age nor the same gender as Chan-sil I could appreciate how the woman has more immediate financial problems than just being undervalued for her work skills.

The emotional element, weirdly enough, is what takes on more central focus as Chan-sil starts to get a crush on Kim-yeong (played by Bae Yoo-ram), a man who is five years younger than her and is also working beneath his station as a French tutor for Sophie. Chan-sil frequently talks about how she just wanted to work in film forever, and we see her appreciating how she was just lucky to be able to do it as long as possible. Kim-yeong, for his pretensions, has not had quite so advantageous an employment history in that regard.

Yet Chan-sil is not exactly a shattered, bitter old maid. Indeed, "Lucky Chan-sil" exudes a surprisingly strong degree of optimism, and not even much in the way of regret. She had her dream job. Even Chan-sil's ghosts, played by Kim Young-min and Youn Yuh-jung, aren't exactly foreboding. They're outspoken and encouraging, and do a real good job of emphasizing to Chan-sil that there's no shame in the life she has lived.

All of "Lucky Chan-sil" exists in this kind of zen state, which I suspect is why the movie has such a counter-intuitive title. Even as we see Chan-sil struggle with the prospect of being romantically rejected by Kim-yeong, or mull over how she's engaged in housework that any random woman her age could probably do, the woman is never dejected. She just enjoys the opportunity available to her and appreciates the chances she has had therein.

"Lucky Chan-sil" is uplifting in ways that I frankly would never have guessed. While writer/director Kim Cho-hee presents the film in the same dejected way as might be expected from many South Korean films these days, she never succumbs to depression or self-deprecation. Chan-sil is an admirable person in spite of her textual failure because so many people, most obviously Sophie, clearly admire her and sincerely take her advice to heart. Chan-sil is a cool older sister and really embodies that whole ideology.