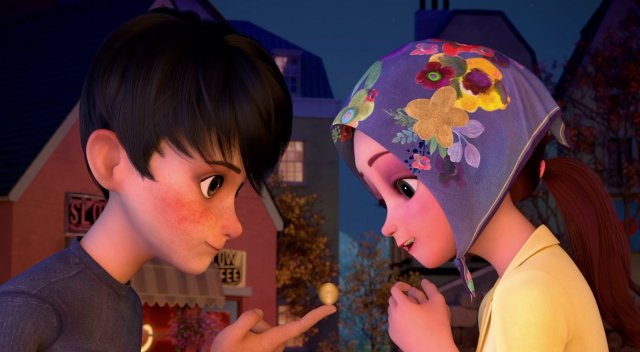 While the title "Magical: Make The Princess Laugh" calls to mind the classic fairy tale of the princess who never smiled, this conflict is resolved surprisingly early and disturbingly. She ends up laughing at a scene that could best be described as macabre. Not that "Magical: Make The Princess Laugh" ever really acknowledges this. This plot point takes place over the course of a cheerful song where professional clowns attempt to distract Leah (voiced by Park Ji-yoon-I) from her mother's senseless tragic death at the hands of a gippy.

I initially thought gippy was some sort of slang for hippy, but it quickly becomes apparent that gippy is actually closer in meaning to gypsy. As in, the racial group that faces discrimination all over Europe. While "Magical: Make The Princess Laugh" means well with its attempted allegory, the execution is unsteady at best. While the gippy's actions in murdering the queen are eventually explained and justified the convoluted set of events required for him to both commit such a heinous act and also remain a sympathetic character is just a tad strained.

Not that "Magical: Make The Princess Laugh" really dives into the allegory that seriously. Most of the movie is just a romance between Leah and a charming street magician. Their love story is horribly clichéd and not very interesting, but mostly harmless nevertheless. Unfortunately because Theo is voiced by Nam Doh-hyeong of "Miraculous", just about every time he spoke I was reminded of a much more clever children's cartoon teenage relationship dynamic.

"Magical: Make The Princess Laugh" is somewhat more original with its worldbuilding. The kingdom the story takes place in fuses a lot of different settings. The royal castle is Victorian, the city layout is medieval, and the city shops give off a seventies red light district vibe. Some storefronts have Chinese names, others neon lighting, while elsewhere we just see street stalls. All of them are incredibly clean, giving a remarkably distinct aesthetic.

The cleanness, at least, is a largely accidental side effect of obvious cost-cutting. The animation quality is quite poor. Many characters look hideous in close-up, with 3D modeling that would have been considered mediocre twenty years ago. The writing is nowhere near strong enough to make up for this sheer ugliness, with only Leah and Theo qualifying as real characters. Nam Doh-hyeong does his best to elevate the proceedings but even he can only do so much with a mediocre script and decidedly less talented co-stars.

Maybe I'm holding "Magical: Make The Princess Laugh" at too high a standard. After all, we're talking about a movie that has sing-along karaoke to its decidedly uninspired kiddy music. Clearly, jaded film critics are not the target audience here. As to who is the target audience, well, I guess a child who would literally be entertained by anything would probably be entertained by this movie. "Magical: Make The Princess Laugh" probably isn't the worst animated film I've ever seen, but I can only even remember so many forgettable movies.