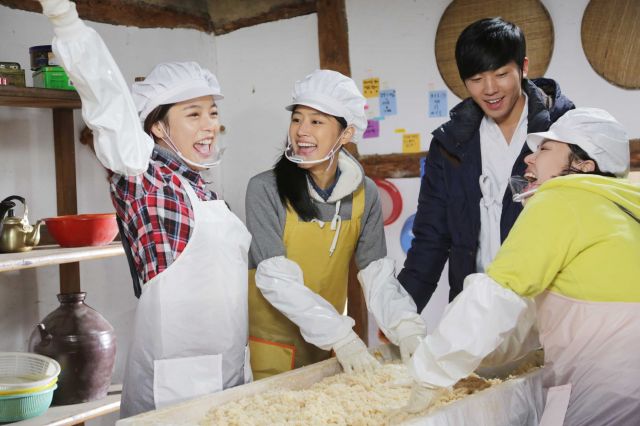 Cho-rong (played by Hong Ah-reum) is a high school student who regularly comes to class obviously and completely drunk. She does have good cause- Cho-rong laboriously works at her family's ancestral rice wine brewery. Her father dedicated his life to brewing rice wine, so Cho-rong wants to honor his memory by doing a good job producing as much rice wine as she can. And this process inevitably involves drinking rice wine, so as to test it. Hence the whole drunkenness problem.

Had it just stuck to this one low-brow, but well-defined plot, "Makgeolli Girls" might have done all right for itself. Where the story runs into trouble is that there are a lot of other plots beside this one, most of which are completely irrelevant. There's the gang war between two groups of hoodlums, the new teacher with rather unexpected abilities, Cho-rong's two sidekicks, who are also high school girls that get drunk, a love triangle, a love subplot, an ancestral rice wine dispute, and also social commentary about whether it's more important to go to college or make rice wine.

For the record I think it's probably more important to make rice wine, because why merely drink alcohol when you can be the one making it instead? Unfortunately any especially meaningful commentary is absent here mostly because the plot spreads itself out too thin with so many characters. "Makgeolli Girls" often has the feel of a grade school theater production, where there's twice as many characters as necessary to guarantee that everyone gets a moment to shine in front of their parents.

I don't want to sound too mean. In contrast to "Salut D'Amour", where the irrelevant subplots actively trampled over the more interesting parts of the story, in "Makgeolli Girls" the story points are well-organized and everyone is able to take their turn. Now, personally, my first choice would be to have a story that's not too complicated for its own good. Granting that much, though, "Makgeolli Girls" at least manages to not be actively terrible.

And there are objectively good points well. The filming takes place entirely in the small town of Chungju. It is a city where everything looks really cold, and there aren't that many big buildings around. Which actually gives a kind of funny subtext to the way Cho-rong keeps being lectured about needing to go college. In most movies a teenager would be desperate to escape a town like Chungju, but in "Makgeolli Girls", the place actually looks kind of homey. What's not to love about a city undeveloped enough that you can easily take bike rides everywhere?

It's very much a low-tech charm, which is about all the charm you're going to get out of "Makgeolli Girls". The performances are earnest, and it does indeed look like everyone is enjoying themselves. This is an independent production with little-to-no product placement even though everyone wears jackets all the time because it's just too darn cold. This makes for a fairly pleasant small-town atmosphere that's not so much a real movie as it is a very earnest effort. Maybe that's enough for some of you. Regardless, it's not enough to warrant a sincere recommendation.